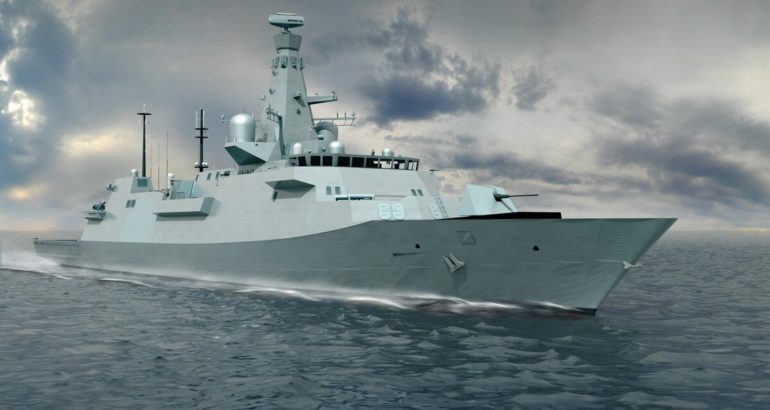 In a steel cut ceremony at BAE Systems’ shipyard in Glasgow, His Royal Highness, Prince William, Duke of Cambridge, set the plasma cutting machine to work on the first plate of steel for the third Type 26 frigate, HMS BELFAST.

Minister of State for Defence Baroness Goldie, together with employees and representatives from the Scottish Government, Royal Navy and the Ministry of Defence, joined the celebrations.

The event marks an important step in the programme to deliver the UK’s latest anti-submarine warfare capability to the Royal Navy, with all three of the first batch of City Class frigates now under construction. The UK-sourced steel plate will form part of a unit which will contain the machinery space for the gearbox and stabilisers of HMS BELFAST.

In recent weeks the first of class, HMS GLASGOW, was rolled out of the build hall into the open for the first time, while progress on HMS CARDIFF continues at pace, with more than 40% of the ship’s units in build at the Company’s Govan shipyard.

Led by electrical apprentice, Cara Shannon, and Type 26 Programme Director, David Shepherd, the Duke of Cambridge enjoyed a tour of HMS GLASGOW during his visit, meeting employees in the ship’s operations room and flight deck.

“Today is a significant milestone for the exciting new Type 26 frigate programme and for Defence. We celebrate and receive great support from our UK shipyards. As a Scot, I am very proud of the skills and expertise of our Scottish shipbuilders here on the Clyde.”

“These new frigates will be equipped with the most advanced capabilities and technologies, enabling the Royal Navy to counter emerging global threats for decades to come.”

“It’s been a privilege to witness this important moment in the life of our third Type 26 frigate and I’m delighted that His Royal Highness The Duke of Cambridge was able to come here today to cut the first steel for the future HMS BELFAST.”

“Despite the obstacles of the past year, BAE Systems’ workforce has continued to deliver what will be a world-leading maritime capability that will join an innovative and forward-looking Royal Navy. We are very proud to work closely with industry to realise the immense opportunity that these ships offer to our growing maritime ambition, our international partners and to the whole of the United Kingdom.”

“Standing in the shadow of HMS GLASGOW which has been brought together on the hardstanding, with large parts of HMS CARDIFF in construction around us, today’s steel cut for HMS BELFAST is another significant milestone in the delivery of the eight-ship Type 26 class, itself part of the wider Global Combat Ship endeavour that we are part of along with Australia and Canada.”

“This is a proud moment for everyone who has worked so hard on this strategic national programme, which sustains thousands of jobs across the United Kingdom and harnesses all of our skills and knowledge to produce the best possible ships for the Royal Navy.”

It’s a great honour to welcome the Duke of Cambridge to our facilities here in Glasgow to join our colleagues and guests on this very proud day. The world-class skills and expertise demonstrated by our teams and suppliers right across the UK play a critical role in delivering this vital advanced capability to the Royal Navy. The City Class frigates are at the pinnacle of complex warship capability and, together with our teams, I look forward to seeing the progress of all three ships.

The Type 26 frigate is an advanced anti-submarine warship which will deliver critical protection of the Royal Navy’s Continuous At Sea Deterrent and Carrier Strike Group. Each Type 26 will be equipped with a range of world-class capabilities including the Sea Ceptor missile defence system, a 5-inch medium calibre gun, flexible mission bay, Artisan 997 Medium Range Radar and towed array sonar. The flight deck will be able to accommodate helicopters up to the size of a Chinook, while the mission bay can quickly adapt to house containers and deploy manned or unmanned vessels and vehicles.

Type 26 has been designed to reduce environmental impacts, with features including a hydrodynamically designed hull to optimise fuel efficiency and an advanced anti-fouling coating, which prevents marine growth and stops the transfer of invasive species on the hull. Each ship will also benefit from diesel engine emissions abatement, which reduces nitrogen oxide exhaust emissions and a waste water treatment system, which treats all ship effluent prior to discharge into the sea. Furthermore, it is envisaged that as new technologies become available, there will be potential opportunities for Type 26 to further mitigate its environmental impact.

Supporting more than 4,000 jobs across the UK, the Type 26 programme is making a significant contribution to the nation’s economic recovery by maintaining much-needed skills and capabilities. To date, more than £1bn has been invested across the programme’s supply chain, with more than 100 suppliers globally.

The Global Combat Ship supports a close partnership between the Royal Navy, Royal Canadian Navy and the Royal Australian Navy, supporting greater operational, training and intelligence ties. In total, the UK, Australian and Canadian Navies will operate 32 anti-submarine warfare frigates, all based on the Type 26 reference design.