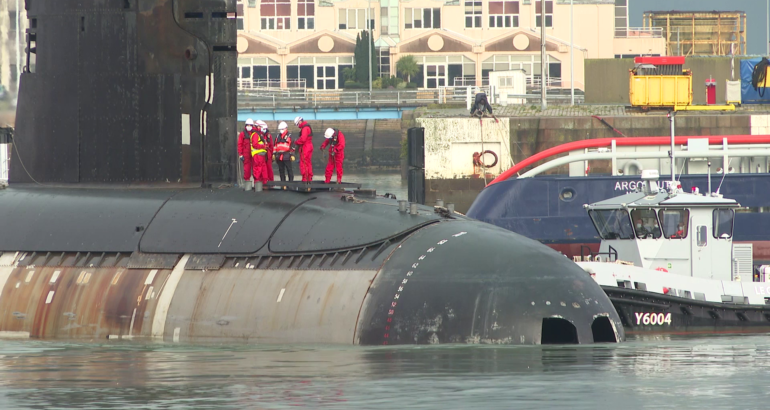 The French Ministry of Armed Forces announced that the fire-damaged Rubis-class nuclear-powered attack submarine (SSN) Perle is now repaired and on its way back to Toulon naval base where its overhaul will resume.

The “transplanting” operation of the two submarines took place in the following way:

“Today Perle is back in the state she was in a few hours prior to the fire. We have erased the damages caused by the fire. As soon as the boat is back in Toulon, the major overhaul will resume […] Sea trials will begin at the end of 2022 and Perle will be operational again in the first half of 2023.”

Perle is expected to remain in service until the 2030ies. During the upcoming overhaul, the flank array sonars will be upgraded.

Cutting, hull welding and connection work was carried out at the Naval Group submarine shipyard in Cherbourg Normandie. Perle is now on its way back to Toulon naval base (aboard the Rolldock Storm vessel) where Naval Group will resume the overhaul of the submarine which was interrupted in June 2020.

Contacted by Naval News, a Naval Group spokesperson said “all critical stages of the repair work have been completed. We will be able to resume work on the overhaul in Toulon for delivery in 2023”.

About 300 personnel took part in the repair work, including 100 from the Naval Group site in Toulon. They were transported to the Cherbourg shipyard by plane on a weekly basis. The repair took a total of 350,000 hours overall (including 100,000 hours of studies).

Perle now features an additional section and is therefore longer by approximately one meter. This is because the two “half hulls” were not cut at the exact same spot, in order to facilitate the connections of internal equipment (such as pipe and cables). The submarine’s displacement is increased by 68 tons. The additional section provides the crew with two new compartments aboard the submarine.

For the record, on June 12 2020, at 10:35 am, a fire broke out in the fore zone of the Rubis-class SSN Perle in a basin within the naval base of Toulon (South of France). The blaze was put out at 12:50 am the next day, after more than 14 hours of a fight that mobilized a hundred firefighters and more than 150 sailors in support.

Perle’s fire leaves a capability gap affecting the French submarine force as well as the security of the French nuclear deterrence. The French Navy is left with only 4 operational SSN. The next class of SSN, the first ship-in-class Suffren , won’t be fully operational for a few weeks still.

From the beginning, the boats were disappointingly noisy and failed to achieve some of the performance objectives (such as top speed). As a consequence, the French Navy and industry embarked on the Amethyste upgrade program in 1989. AMETHYSTE stand for Amélioration tactique, hydrodynamique, silence, transmission, écoute (Silent Acoustic Transmission Tactical Hydrodynamic Improvement). It brought a number of upgrades including a major change to the hull form and bow. By 1995, all six boats of the class had been upgraded. Rubis-class submarines are now regarded as very capable boats. The French Navy deployed the Emeraude all the way to the Pacific Ocean earlier this year. It also conducted a South China Sea patrol.