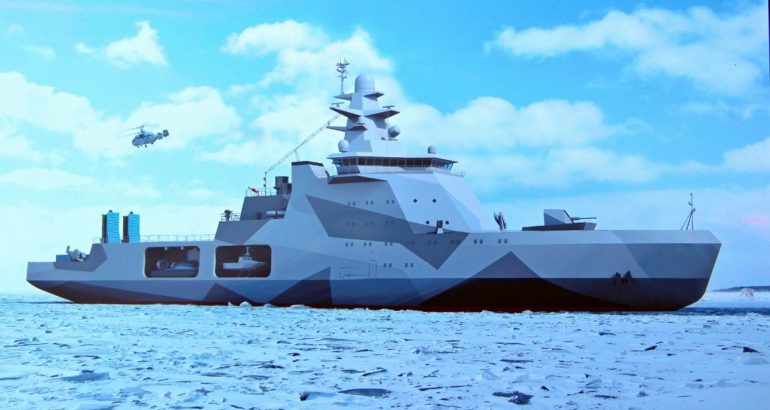 Project monitor and member of the company’s board of directors Victor Kot said:

“The Ivan Papanin-class Arctic reefer vessel can carry a mobile Kalibr-K missile system. This will require three standard cargo containers that can be delivered to the ship and unloaded ashore with 40-ton shipboard cranes,”

If it is necessary to unload the mobile missile system onto the shore, the fourth container can be installed aboard the reefer ship to accommodate the Kalibr-K combat squad, the project monitor said.

As it was reported earlier, the Ivan Papanin-class multipurpose reefer ship will be capable of sailing along the Northern Sea Route without icebreaker support thanks to its ice-reinforced hull, the Azipod electric propulsion system, and an ice radar station. The vessel will be able to promptly deliver modules with repair shops, medical and living facilities, and also groups of specialists to research and military bases in the Arctic. The main task of the ship will be the delivery of seafood from the Far East to European Russia.

The Kalibr-K can receive target acquisition data from any coastal, shipborne, airborne and satellite systems. Kalibr cruise missile systems are currently operational with the Russian Navy. According to open sources, a 3M-14 cruise missile of the Kalibr system develops a subsonic speed and is capable of striking targets at a distance of about 2,000 km (1,243 mi).

For the record, the Project 23550 is a multirole icebreaker combining the functionalities of a tugboat, patrol ship and an icebreaker capable of breaking ice up to 1.7 meters thick. Project 23550 ships are designed to protect and monitor Arctic water resources; escort and tow other vessels; act as a support vessel; participation in rescue operations; transport various cargo in the Arctic…

The vessel has a total displacement of about 9,000 tons; a length of about 114 meters; a width of about 20 meters and a draft of about 6.0 meters. Its maximum speed is 18 knots; economic speed of 10 knots; crew / additional crew of about 60/50 people. The endurance is 70 days at sea. Arctic ship category: Arc7.

In terms of weapon systems and equipment, Project 23550 vessels are fitted with a 76-mm AK-176MA main gun; portable air defense systems; helipad and helicopter hangar able to accommodate a Ka-27 class helicopter and unmanned aerial vehicles; two Raptor high-speed assault boats of the Raptor type and one Project 23321 hovercraft. Last but certainly not least, the vessel can be fitted with a containerized version of the Kalibr-NK missile system.