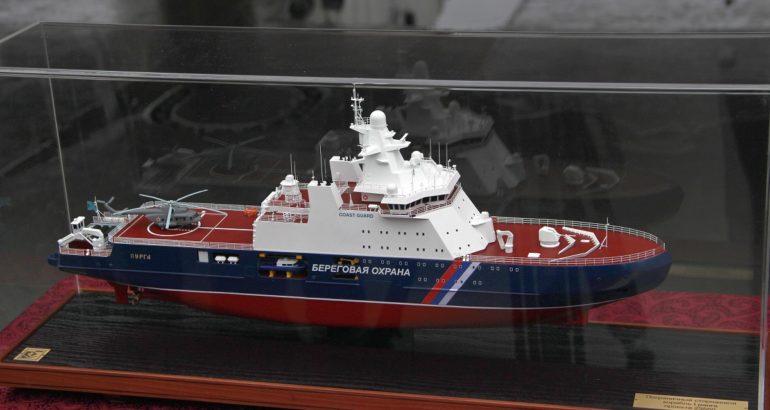 Russia's Vyborg Shipyard held a keel laying ceremony on 25 July for the "Purga" ice-class coast guard ship of project 23550, the enterprise said. The vessel is intended for the border guard service of the Federal Security Service (FSB) of the Russian Federation.

“The new ship will increase the security of Russian borders, also in the strategic Arctic region,”

The Yermak-class ship will be built for four years. It will operate in the Arctic and the Far East.

“The ship is created on the basis of project 23550 of Almaz Bureau. It has been upgraded according to the requirements of the Border Service,”

The ship can deliver cargoes to unequipped coast. The navigational range is 10 thousand miles. The ice class and good seaworthiness and communication means allow operating in any conditions.

A model of the future-ice-class coastguard ship was presented at the ceremony. It is armed with AK-176MA 76.2mm gun in the bow and two small-caliber AK-306M 30mm antiaircraft guns. The ship can carry various Mi-8 and other helicopters.

Project 23550 ice-class patrol ships protect Arctic resources, escort and tow detained vessels to seaports. They can destroy sea, coastal and air targets and break 1.7-meter thick ice. The displacement is 9000 tons and the full speed is 18 knots. Autonomous navigation is 70 days. The navigational area is unlimited.