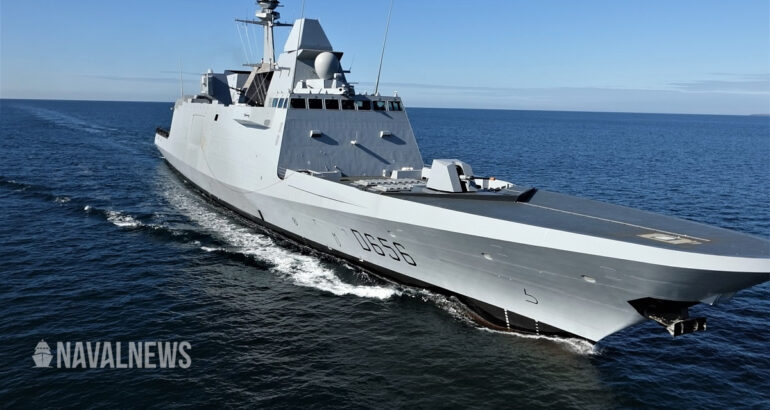 Alsace, the first of the two FREMM DA for the French Navy, during sea trials off Lorient in October 2020. Naval News picture

This means the vessel is now able to conduct operational missions. Alsace is currently taking part in the large scale exercise POLARIS, as part of the Charles de Gaulle strike group.

“The multi-mission frigate Alsace is ready for operations. It belongs to a class of frigates recognized worldwide for its combat capabilities. The renewal of the Marine Nationale equipment is essential in the current strategic environment. To protect our coasts and our exclusive economic zone, in the face of obstacles to freedom of navigation, in the face of attempted intimidation at sea, in the face of the desire to deny access to certain areas, France needs a strong, efficient and credible Navy”.

On 17 November, the successful firing of the Aster 30 anti-aircraft missile validated Alsace‘s operational capabilities. She now joins the other FREMMs that form the backbone of the French surface fleet.

The FREMM DA Alsace  was launched April 18, 2019 at the Naval Group shipyard of Lorient thirteen months after its keel laying. It is the ninth FREMM frigate built by Naval Group and the seventh one for the French Navy. The FREMM DA program started in 2008. Alsace and Lorraine are replacing the two Cassard-class (Type F70 AA) frigates and their ageing SM-1 surface to air missiles. Cassard was decommissioned on 15 march 2019 and Jean Bart was decommissioned earlier this year.

Alsace‘ sistership, Lorraine, (the final FREMM for the French Navy) was launched in November 2020 and is set to be delivered in the second half of 2022.  Following the delivery of its last FREMM, Naval Group will transition to the FDI, the next generation of frigates for the French Navy.

According to Naval Group, the FREMM DA Alsace is a strongly armed surface combatant fitted with the most performant weapon systems and equipment such as: the Herakles multifunction radar, the Aster 15 and 30 surface to air missiles, the Excocet MM 40 anti-ship missiles or the MU 90 torpedo. The performance of its combat system are reinforced with increased radar and communication capacities, a new fire control radar, and a SETIS CMS fitted with specific anti-air defense functions.