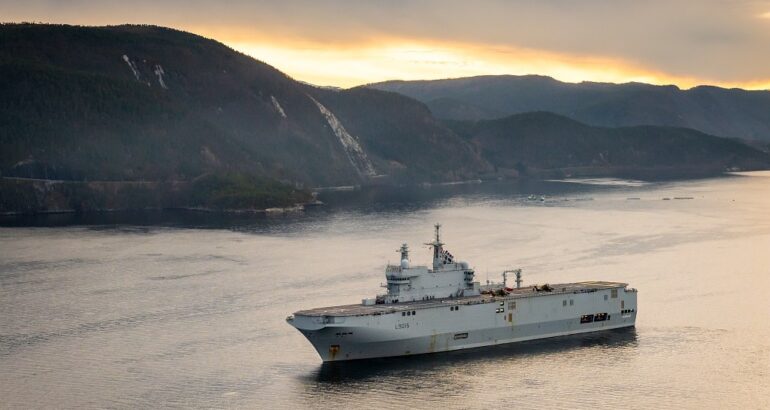 Dixmude participating to NATO exercise TRIDENT JUNCTURE in 2018 in Norway.

The French Navy Mistral-class LHD 'Dixmude' left Toulon on February 18, to join the North Atlantic theater and participate in the Norwegian-led exercise COLD RESPONSE 2022 (CORE 22). This joint and combined open-air exercise will take place in northern Norway. Its objective is to reinforce the capabilities of the allied armies to operate together in demanding weather conditions.

Forty-eight hours after leaving Toulon, her home port, Dixmude had the opportunity to conduct training at sea with the Italian aircraft carrier Guiseppe Garibaldi, also deployed to participate in CORE 22. The two ships seized this opportunity to share their know-how and strengthen their mutual knowledge

During a simulated confrontation between the two European ships, the French Navy’s S100 UAV spotted Garibaldi‘s position, demonstrating the added value of this aircraft in operations. The operational and aviation chains also trained together through cross-docking, such as an Italian Merlin helicopter on the flight deck of the LHD. The exercise concluded with a meeting between Garibaldi‘s Executive Officer and Captain Emmanuel MOCARD, Dixmude‘s Commanding Officer, who discussed future joint activities between the two units in extreme conditions in the Far North.

The crew of the LHD is now on its way to La Rochelle (city on the West coast of France), where it will embark its battle group, composed primarily of Marine Infantry from the 1st Marine Infantry Regiment (1st RIMa). It will then conduct amphibious maneuvers for training. The 1st RIMa’s marines will also be involved in the land component of CORE22.

Cold Response is a Norwegian-led military exercise held in northern Norway every second year. The next exercise is scheduled for March and April 2022 and will be led by the Norwegian Joint Headquarters. The first allied troops arrive in Norway already in the autumn and winter 2021–22 to train and prepare for the exercise.

The military activity will mainly take place in south-eastern Norway, central Norway and the northern parts of the country. Cold Response 2022 will test air, sea and land elements, and Norway offers excellent arenas to train realistically in all of these domains.

As of January 2022, a total of 28 nations and approximately 35,000 troops are signed up for the exercise. Of these, 14,000 are land troops, 13,000 are sailors and navy troops, while the remaining 8,000 participants are air force troops and various staff officers based at various military bases in Norway.