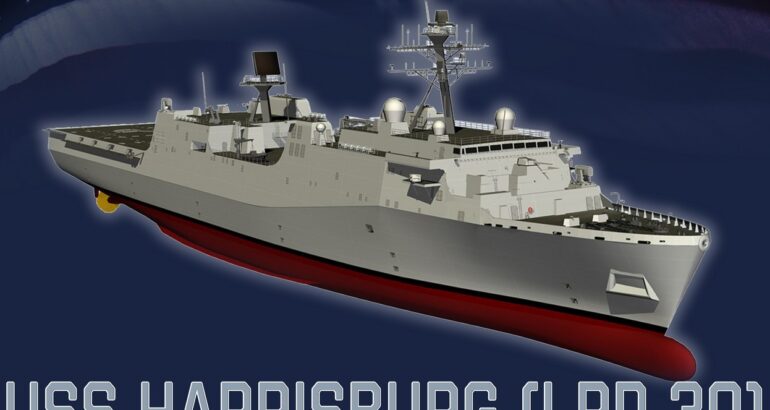 The ship’s sponsor, Alexandra Curry, a resident of Middletown, Pennsylvania, and wife of the Middletown mayor, was unable to attend the ceremony so Program Executive Officer Ships Rear Adm. Tom Anderson, stepped in to declare the keel “truly and fairly laid.”

“While she could not join us, we welcome Mrs. Curry in spirit as she is now an important part of our shipbuilding family. We look forward to being with her throughout the life of the ship, and we are very grateful for her commitment to this crew. She is a true patriot, with deep respect and gratitude for military service.”

The keel ceremony marked the start of construction for Harrisburg by welding the initials of the ship’s sponsor into a ceremonial plate.

Harrisburg is being built at Ingalls Shipbuilding and will be the first Flight II amphibious ship in the San Antonio class. LPD Flight II is the next generation amphibious ship to replace Whidbey Island (LSD 41) and Harpers Ferry (LSD 49) classes of dock landing ships. Huntington Ingalls has delivered 11 San Antonio-class ships to the U.S. Navy and has three more under construction.

The San Antonio class is a major part of the Navy’s 21st-century amphibious assault force. The 684-foot-long, 105-foot-wide ships are used to embark and land Marines, their equipment and supplies ashore via air cushion or conventional landing craft and amphibious assault vehicles, augmented by helicopters or vertical takeoff and landing aircraft such as the MV-22 Osprey.

The ships support a Marine Air Ground Task Force across the spectrum of operations, conducting amphibious and expeditionary missions of sea control and power projection to humanitarian assistance and disaster relief missions throughout the first half of the 21st century.

Naval News Staff 30 Aug 2022
Huntington Ingalls Industries (HII) has announced that it has received a contract from the U.S. Navy to begin availability of combat systems for the Zumwalt-class destroyer Lyndon B. Johnson (DDG 1002).