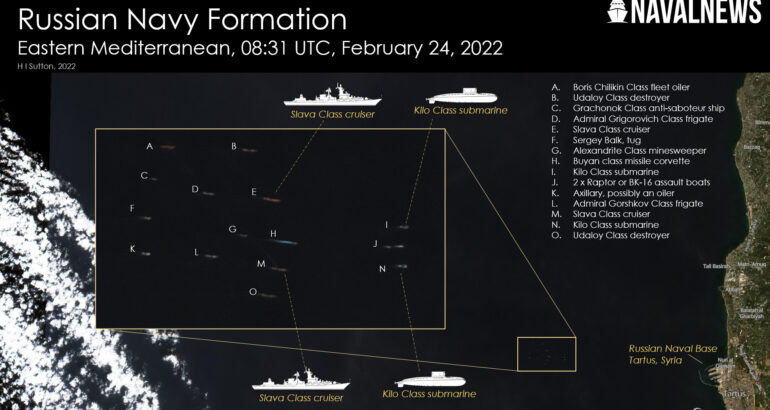 Click to Enlarge. The formation includes two Slava Class cruisers, their escorts, and two submarines. Equally importantly, they are accompanied by auxiliaries and support vessels.

As the world watches Russia's invasion of Ukraine, there is also a significant and purposeful Russian Navy presence in the Mediterranean. This is part of the same big picture. Today they have been observed sailing close together in an unusual formation.

Russia has reinforced its naval presence in the Mediterranean, much more than usual. This can be seen as an outer defense layer for naval operations in the Black Sea, off Ukraine. In particular, to deter NATO involvement, especially from the US and French aircraft carriers.

At the same time that Russian Navy units supported the invasion of Ukraine, their major warships in the Mediterranean came together. Both of the Slava class cruisers presently there, plus escorts and support ships, were sailing in close formation. They appeared to be sailing to Tartus in Syria where Russia has a base.

The unusual formation is clearly visible in European Space Agency’s (ESA) satellite imagery. An image, taken by the Sentinel 2 satellite at 08:40 UTC today, shows 16 ships. At the exact same time information was flooding in about the opening attacks in the Ukraine invasion.

The formation is only 0.9 miles (1.5 km) across and 1.7 miles (2.7 km) long, meaning that all ships are within visual sight of each other. The ships were already within Syrian territorial waters and heading directly for the port of Tartus. This is Russia’s only overseas naval base. Here the vessels are operating under significant air cover and an air-defense umbrella from Russian bases in Syria.

The closeness of the formation, particularly with two submarines, suggests a photo opportunity. Similar formations are often seen during exercises, but not in wartime conditions. Even if that is the case for the exact maneuver however, the bigger picture remains the concentration of forces at Tartus, possibly for protection and resupply.

All The Ships In One Place

This is the concentration of essentially the entire Russian Navy in the Mediterranean, in one place. Ordinarily these vessels would be operating in distinct groups. Them being where they were showed that, for a moment, neither of the Kilo class submarines were on patrol. Neither the cruisers which are likely causing NATO significant concern.

The Slava class cruisers are primarily anti-ship platforms. For this they are each armed with 16 P-1000 Vulkan supersonic missiles. They also provide respectable area air-defense with 64 S-300F Rif missiles.

Other combatants include two Udaloy Class anti-submarine destroyers, and two general purpose frigates. The frigates, and a Buyan-M class corvette, can all carry Kalibr cruise missiles which is a weapon used in the Ukraine invasion. The Kilo Class submarines can also carry this weapon.

Naval News assesses that it is likely that the ships may have separated again into several groups. Some Russian warships may now sail to the Black Sea to directly support operations there. This will mean transiting the Bosporus Strait through Turkish waters. This will be controversial, and Ukraine has reportedly asked Turkey to close the straits to Russian ships.