Russia’s unprovoked invasion of Ukraine, and the grinding war that has followed, will be studied by war colleges for years, perhaps even decades. Among the many lessons learned during this conflict, one that will likely be most prominent is the vital importance of logistics in warfare.

The defense and open media have been filled with stories regarding Russia’s logistics challenges. A recent article had this headline: “Logistics Woes Hinder Russia’s Military.”

On the other side of the Atlantic, as the United States Marine Corps refocuses itself for the challenges of the 21st Century, logistics is at the forefront in the minds of Marine Corps planners as it has been throughout the Services’ history. As the Marine Corps prepares for the high-end fight against peer competitors, the tyranny of distance must be addressed. Here is how an article in the U.S. Naval Proceedings described the challenge:

It is roughly 6,000 nautical miles as a missile flies between San Diego and Taiwan, and a bit more than 5,000 from Seattle. Russia’s invasion of Ukraine and the 30th anniversary of the Falkland Islands War have sharpened attention on the challenges surrounding sustainment of U.S. forces in the Western Pacific should those miles ever have to be covered in the face of determined opposition.

These are profound challenges that bedevil the United States and allied nations, but ones that are beginning to be addressed with emerging technology.

Logistics: More Than an Enabler

It should come as no surprise that logistics has emerged as a crucial factor in the wars of the third decade of the 21st Century. Logistics have been a crucial factor in warfare for well over two millennia. Alexander the Great put it this way: “My logisticians are a humorless lot…they know if my campaign fails, they are the first ones I will slay.”

Armed with the experience of two-decades of war in Iraq and Afghanistan, the U.S. military is focusing more intently on logistics than it has in some time. This includes maritime logistics, a subject that has been addressed in a number of articles in professional journals. Here is how one active duty naval officer put it in the pages of the U.S. Naval Institute Proceedings:

The great diversity of challenges that threaten the U.S. Navy in the near term – spanning all domains and all levels of warfare – has led to an unequal concentration of effort, leaving some areas unaddressed. Maritime logistics ranks chief among them…Great maritime powers have always sought the capacity to interdict their enemies “vital lines of communication” while protecting their own. Fleet Admiral Ernest King’s strategic retrospective still applies: “It is no easy matter in a global war to have the right materials in the right place at the right time in the right quantities.”

Moving from the macro to the micro, from the strategic to the operational and even tactical, it is no accident that Marine Corps professionals are keenly focused on logistics as they “return to their amphibious roots.” Amphibious operations represent perhaps the one area where logistics cannot fail. Once Marines are on the beach, if their logistics breaks down, they have few options to continue the fight, and might even have to withdraw.

Even for those with only a passing knowledge of modern warfare, the challenge of amphibious operations, where the attacking force must bring everything they need: from guns to beans to bullets – in great quantities – to dislodge an adversary from an entrenched position ashore is clear. This is an “away game” with the preponderance of the advantages going to the defenders.

Marine Corps officers have become increasingly vocal about the need for the Service (in conjunction with U.S. Navy expeditionary forces) to “up its game” in the logistics arena. During a military-industry symposium, Marine Corps Brigadier General Arthur Pasagian, USMC, Commander, Marine Corps Systems Command, noted: “Logistics is a key enabler for all we do.”

“We are not putting enough emphasis on logistics. We need to pressure test logistics because we can’t win without sustainment. The challenge for the Marine Corps is the last logistical mile and we have much more work to do to address our logistics challenges.”

Concurrently, other Marine Corps officers have emphasized the importance of seeking technology solutions for the Services’ needs, especially in the logistics arena, with the Commanding General, Marine Corps Combat Development Command and Deputy Commandant for Combat Development and Integration, Lieutenant General Karsten Heckl, stating: “We need to get unmanned platforms into operators’ hands.”

From Aspiration, to Experimentation, to Logistics Solutions

The Navy-Marine Corps team has been proactive in pushing the edge of the envelope in leveraging new technologies to make the nation’s expeditionary assault force more distributed, lethal, survivable and sustainable. Many of these technologies have aided high-end and highly visible missions, but others have looked at missions conducted by the Navy-Marine Corps team that are typically “below the radar.” Given the importance of logistics to the success of any amphibious assault, the sustainability function is one that is ripe for new technology insertion.

Navy-Marine Corps exercises such as a series of Advanced Naval Technology Exercise (ANTX) events and the annual Bold Alligator series have looked at a wide-range of emerging technologies that can make expeditionary assault forces more lethal, agile and survivable. Other events have examined different missions conducted by the Navy-Marine Corps team, specifically the logistics and sustainment function. The INDOPACOM Joint Exercise Valiant Shield exercise, overseen by Commander Marine Forces Pacific (MARFORPAC), experimented with using emerging technology to provide sustainment to Marines on the beachhead during this critical juncture of an amphibious assault.

Using manned naval craft for this sustainment mission puts operators at unnecessary risk of enemy fire, as well from near-shore obstacles that were not cleared prior to the assault phase. Using scarce manned craft to perform this mission also takes them away from more necessary roles. That is why this major Navy-Marine Corps amphibious exercise evaluated the ability of unmanned surface vehicles to conduct this sustainment mission.

This proof-of-concept with a 12-foot MANTAS USV achieved positive results. That said, resupply in 120-pound increments is far less than is required to provide what is needed by Marines on the beach. The Valiant Shield exercise provided the impetus to continue to explore the use of USVs for amphibious force sustainment. The Navy and Marine Corps are now looking to scale-up small USVs and continue to experiment with using larger USVs to provide larger sustainment quantities.

While there are a range of larger USVs that can be evaluated by the Navy and Marine Corps, the basic specifications of the 38-foot Devil Ray “Expeditionary Class” (T38) provide an indication of the ability of USVs to provide a steady, continuous stream of logistics support to Marines on the beach. The T38 can carry a payload of 4,500 pounds. The vessel travels at cruise speed of 25 knots and draws just 18 inches of draft. Additionally – and importantly for an amphibious assault – the T38 has a burst speed of 80 knots.

More robust logistics resupply can be provided by larger USV of the same family of Expeditionary Class unmanned surface vehicles as the MANTAS and Devil Ray. The T50 Devil Ray can carry a payload of 10,000 pounds. Like its sister T38, the T50 has a cruise speed of 25 knots and a burst speed of 80 knots. Given the speed and carrying capacity of the T38 and T50, it is readily apparent how they can support the rapid buildup of combat power on a contested beach.

As any observer can see from a hilltop near one of several U.S. Marine Corps bases, an amphibious formation typically stands no more than 15-25 nautical miles off the beach being assaulted. Using a notional stand-off distance of 20 nautical miles, an amphibious formation equipped with four T38s traveling at their cruise speed of 25 knots could deliver 18,000 pounds of material from the amphibious ships to the beach per hour, allowing the short time needed for loading and unloading the craft. Multiply that by twenty-four hours and you get a buildup of well-over 400,000 pounds of vital material per day, enough to support a substantial force of troops ashore. Using four T50s in a similar manner, the amount of vital material delivered approaches one million pounds a day.

An operational planner looking at these options would have every right to ask: “Where do these USVs come from, and how do they get to the area of operations?’ This is a fair question, but one that is being addressed by Navy and Marine Corps planners, as well as by military and industry engineers. As to how the medium USVs can be delivered across significant ocean expanses, the U.S. Navy recently announced its intention to spend close to three billion dollars developing and buying ten large unmanned surface vessels over the next five years. The Navy envisions these LUSVs as being 200 feet to 300 feet in length and having full load displacements of 1,000 tons to 2,000 tons. These LUSVs can carry significant numbers of T38s and T50s.

Under this concept of operations (CONOPS) presented in a March 2022 article in Naval Engineers Journal, “Engineering Unmanned Surface Vehicles into an Integrated Unmanned Solution,” one or more LUSVs would be attached to an expeditionary strike group and carry these T38s and/or T50s. Supervisory control is coordinated by the expeditionary strike group commander or his designees.

This elegant solution has three primary attributes. First, the T38 has a cruise range of 1,000-1,500 nautical miles, while the T50 has cruise range of 1,500-2,000 nautical miles, enabling the expeditionary strike group commander to maintain a standoff distance from adversary anti-access area denial weapons. Second, as Soviet leader Joseph Stalin famously said (referring to Russian-German tank battles during World War II): “Quantity has a quality of its own.” Disbursing logistics supplies in 4,500 or 10,000 pound increments among speedy craft means that the loss of one T38 or T50 will not derail an entire operation in the same manner as losing a large naval vessel would. Finally, and most importantly, delivering logistics support to Marines on the beach in this manner does not put Sailors and Marines in harm’s way.

Congressional critics have, perhaps correctly, threatened to withhold funding the Navy wants to use to procure large numbers of small, medium and large unmanned surface vehicles until the Navy can present a convincing CONOPS for how it actually plans to employ these vessels. As the Navy and Marine Corps conduct a wide range of exercises, experiments and demonstrations in the years ahead, it is long past time to conduct a “Valiant Blitz 2.0” to demonstrate how these unmanned surface vehicles can provide robust logistics sustainment to Marines on the beach.

Mr. Rowley is an experienced and accomplished multi-disciplined engineering project and program management professional with over 35 years of project/program management of complex ocean, electrical and mechanical engineering systems design.  As a retired U.S. Navy Surface Warfare and Engineering Duty Officer, his experience base includes both Government and commercial sectors.

Mr. Rowley has a wide array of engineering and project management accomplishments in the areas of Naval Architecture and Ocean Engineering.  Prior to his retirement from the Navy, he administered, and program managed the $1.2B Landing Craft Air Cushion (LCAC) U.S. Navy Government shipbuilding contract.  In the past two decades, while at SAIC/LEIDOS, he led the SAIC IR&D engineering design team to field a NOAA sanctioned SAIC Tsunamic Buoy (STB) and successfully designed, constructed, tested and deployed 24 STB buoys in the international arena.  Mr. Rowley additionally served as the engineering technical director and lead naval architect integrator for the DARPA ASW Continuous Trail Unmanned Vessel (ACTUV).   Now known as the Medium USV Sea Hunter, the 131ft unmanned trimaran surface craft is the first major autonomous USV with a range of up to 7000 nautical miles and is currently operating as a USV test platform for the Navy within the Surface Development Squadron One in San Diego, CA.

Mr. Rowley has the degree of BSEE from University of Oklahoma as well as an MSME and Degree of Ocean Engineer/Naval Architect from MIT. 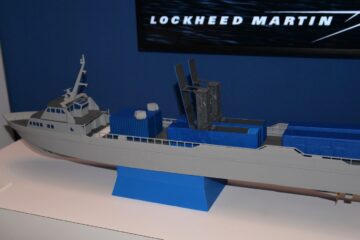