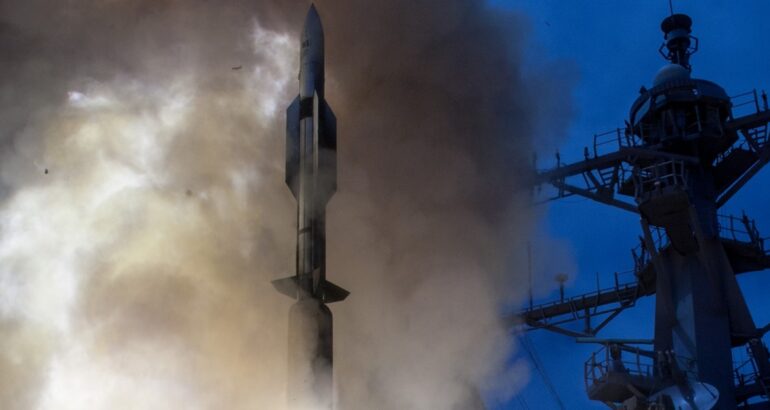 The decision to go ahead with the SM-6 procurement was made at the 143rd meeting of the Defense Acquisition Program Promotion Committee presided over by Minister of National Defense Suh Wook and held on the 26th.

The ROK government will invest ₩760 billion (around $600 million) from 2023 to 2031 to acquire the SM-6. The missiles will be deployed on the three Aegis-equipped King Sejong the Great-class (KDX-III) Batch-II destroyers which will be delivered to the Republic of Korea Navy (ROKN) starting from 2024.

“We expect the anti-air and anti-ballistic capabilities of our Aegis-equipped destroyers will be greatly improved with the acquisition of the SM-6.”

The ROKN had received significant criticism over its lack of anti-ballistic missile capabilities. This is because its current fleet of Aegis-equipped ships can only provide early warning of incoming ballistic missiles and are unable to actually intercept them.

The SM-6 has a range of 240~460 km, around twice the 170 km range of the SM-2, currently in service with the ROKN. This means that it will help the ROK defend against ballistic missile threats, mainly from North Korea.

According to Raytheon, the RIM-174 Standard Extended Range Active Missile (ERAM), or Standard Missile 6 (SM-6) is three missiles in one: It’s the only weapon that can perform anti-air warfare, ballistic missile defense and anti-surface warfare missions. The system offers navies more flexibility in limited ship space. The missile has an operational range up of about 370 km and a top speed of March 3.5.

Hyundai Heavy Industries announced that it signed a contract with the Defense Acquisition Program Administration (DAPA) for the three ships of the KDX-III Batch-II on October 10th 2019.

The program will deliver one destroyer every two years, starting from 2024. The ships will receive the pennant numbers 995, 996, and 997 and have an empty displacement of 8,100 tons, around 500 tons more than the KDX-III Batch-I. The ships will be 170 m in length, 21 m in width, and have a top speed of 30 knots. The three existing 7,600-ton KDX-III Batch-I ships are based on the DDG 51 Arleigh Burke-class destroyers of the US Navy.

According to our South Korean sources, the KDX III Batch II ships will feature a total of 88 vertical launch system (VLS) cells:

K-VLS II are larger cells currently being developed by Hanwha to launch the future long-range surface-to-air missile (150 Km range) Cheongung 3 (also known as L SAM). Naval News learned from a source at LIG Nex1, that the naval L SAM (which is still in conceptual phase) will only have minor modifications compared to the land-based variant. L SAM is intended to replace SM-2 in the ROK Navy. K-VLS II will also likely be used to launch the new supersonic anti-ship missile.