Netherlands to upgrade only 2 LCF frigates with ESSM Block 2

The Dutch Defense Minister, Christophe van der Maat, informed the Dutch Parliament that the upgrading plans for the De Zeven Provinciën class frigates with the ESSM Block 2 air defense system had been changed. The initial intention was to upgrade four frigates, however, the Dutch MoD reduced the number to two.

Beginning in 2028, two of the four air defense and command frigates (LCF) will be equipped with improved air defense missiles and technologies, Evolved Sea Sparrow Missile (ESSM) Block 2 missiles. The original plan was to upgrade all four frigates with ESSM in 2018, but the plan was changed for various reasons. On April 29, Secretary of State Christophe van der Maat submitted this letter to the House of Representatives.

The primary mission of LCF is to defend an entire fleet against an airborne threat, which has been growing, particularly with modern anti-ship missiles. These are advanced weapons capable of several times the speed of sound and are also highly maneuverable. The Dutch Navy’s current surface-to-air missiles are increasingly unable to counter this modern threat.

This is less of an issue for the ESSM Block 2, which is a contemporary surface-to-air missile designed for warships. The missiles collaborate with the Active Phased Array Radar (APAR), which does not rotate, but instead continually monitors the airspace with four units. The APAR has a range of 150 kilometers and can concurrently scan, track, and transmit the location of numerous targets to fire control. The launched missile is guided to the target by the radar.

The new APAR is currently in development and will not be available until 2027. This will originally be developed for the new ASW frigates which will replace the M frigates by the end of this decade.

The (new APAR) radar was originally scheduled to be deployed in all four LCF, however, the plan has been revised to outfit only two frigates rather than all four. The key reason is that the installation of the new APAR radar has proven to be far more expensive than anticipated.

Furthermore, prior to the update, the ships need to undergo extensive maintenance, which should last around a year. Because two of the LCF have already completed the maintenance, it would be inefficient to offer the new technology to these two LCF thereafter. In such a situation, these ships, which have already undergone repair, will not be available for a longer period of time twice within a few years. The remaining two frigates (which will not receive APAR 2 modernization in the first batch) will be replaced beginning in 2034.

It is also expected that by 2028, spare parts for the current missile-firing systems, including the current version of APAR, will run out. It will be used for a longer period of time because it was agreed in 2019 to retain the LCF in service for a further five years. This decision was made because the Ministry of Defense needed to free funds for real estate projects. This was not factored into the spare part inventory. Those components are now sourced from ships that will be upgraded in the future.

Although the costs are higher than expected, the amounts projected for 2018 are unaffected. Instead of four radars, the Ministry of Defense will purchase two, requiring fewer ESSM Block 2 missiles in total. The entire cost will range from €250 million to €1 billion. Thales, a Dutch corporation, is developing the technology.

The Royal Netherlands Navy has 4 air defense and command frigates (LCF) of the De Zeven Provinciën-class. The ships can protect a complete fleet from enemy threats from the sea and from the air (aircraft and missiles). Specialized in anti-aircraft warfare (AAW) vessel, LCF vessels are fitted with 40x Mk41 Vertical Launch Systems which are used to house and launch Evolved Sea Sparrow (ESSM) and SM-2 Block IIIA missiles.

The first-in-class ship received her SMART-L Multi Mission radar upgrade from Thales in March 2019. All four ships of the class will be upgraded with the new radar (and other systems) as part of a modernization programme. This new radar is capable of BMD mission (surveillance and tracking of ballistic missiles) up to 2000 km while simultaneous maintaining the air defence capability. The Dutch Defence Material Organisation (DMO) announced in April 2020 that it has selected Italian company Leonardo to supply new 127mm naval gun systems.

APAR Blk2 defends against saturation attacks in the highest threat scenarios by supporting many simultaneous AAW and ASuW engagements with both active and semi-active guidance using ICWI. Firepower is limited only by the rate of fire by the launcher. ESSM and SM-2 have supported as well as ESSM Block2 and the future Standard Missile family using the JUWL datalink. 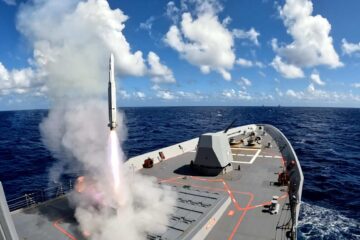 Xavier Vavasseur 05 May 2022
The Australian Government announced it is procuring the ESSM Block 2 surface to air missile from Raytheon for the Royal Australian Navy (RAN).