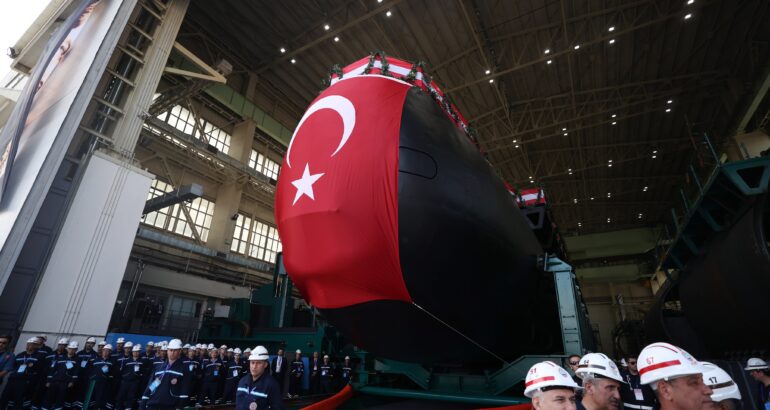 Turkish President Recep Tayyip Erdogan was the chief guest at the event, which was attended by numerous Turkish officials, including the Defense Minister, and the Command Echelon of the Turkish Armed Forces.

Speaking at the ceremony, President Erdogan said Turkey plans to commission one Reis-class (Type-214TN) submarine each year so that the Turkish Navy will have six new submarines by 2027.

“Our submarines, which weigh 1,856 tons above water and 2,042 tons underwater, can dive into a depth of more than 300 meters. Our submarines, which can operate underwater for three days, can stay in the water for 12 weeks without needing resupply. The submarines, equipped with effective weapons against underwater, surface and land targets, can fire various types of torpedoes, missiles and mines. We are also integrating our Akya national torpedo and Atmaca national anti-ship missile into our submarines with air-independent propulsion.”

One of the most important details of the ceremony was the President’s announcement about Turkey’s future national submarine, the MILDEN (Milli Denizalti). This was the first-ever official statement about this project.

“Turkey will begin building the MILDEN in 2025 in Gölcük Shipyard. We plan to deliver the MILDEN submarine 5-6 after starting the construction.”

The contract signed in July 2009 between the Presidency of the Turkish Defense Industries (SSB) and Thyssen Krupp Marine Systems is to build 6 submarines with an air-independent propulsion (AIP) system and place them in the service of the Turkish Naval Forces.

As part of the project, the first submarine PIRI REIS, which is being built at the Golcuk Naval Shipyard, was launched in 2019, floated in the water in March 2021, and is scheduled to enter service for the Turkish Navy in 2022. The second submarine HIZIR REİS, which was dry-docked on 24 May, is scheduled to be commissioned in 2023. From this year on, one submarine will be commissioned every year, and 6 Reis-class submarines will be delivered to the Turkish Navy by 2027. The delivery schedule of the submarines is given below;

About 30 local companies are involved in the project, including Aselsan, Havelsan, STM, Milsoft, and so on.

The Reis-class submarines feature a single-hull, one-compartment design and an air-independent propulsion system on the proven Howaldswerke-Deutsche Werft (HDW) fuel cell. The submarines have a length of 68.35 meters, an outer diameter of 6.3 meters, a displacement of 1,850 tons, and a capacity of 40 personnel.

The boats will deploy heavyweight torpedoes (MK48 Mod 6AT and DM2A4), anti-ship missiles (Sub-Harpoon), and mines. Indigenous heavyweight torpedo Akya and anti-ship missile Atmaca are expected to be fitted to the next submarines of the project. The Reis-class submarine will be able to undertake missions such as littoral water operations to ocean-going patrols, including anti-surface and anti-submarine operations, ISR tasks, and special forces operations. This is mainly thanks to their increased diving depths and their modular weapon and sensor mix. 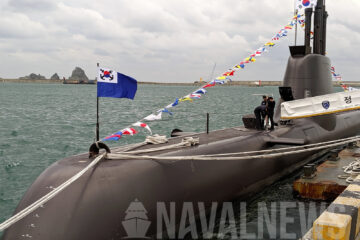