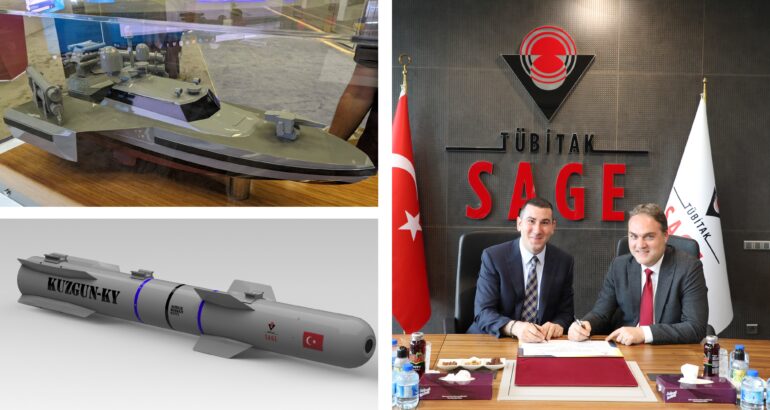 Sefine Shipyard and the "Turkish DARPA", the TUBITAK SAGE, collaborates to develop high-tech solutions for the Turkish Navy

Turkey's Sefine Shipyard and TUBITAK (Scientific and Technological Research Institution of Turkey) signed a strategic cooperation agreement on July 13, 2022, at the premises of TUBITAK SAGE (Research and Development Institute) in Ankara.

The “Strategic Cooperation Agreement Signing Ceremony” was held on June 13, 2022 at the facilities of TUBITAK SAGE between the Scientific and Technological Research Institution of Turkiye (TUBITAK) Defense Industry R&D Institute (SAGE) and Sefine Shipyard. The ceremony was attended by the director of TUBITAK SAGE Institute, Gurcan OKUMUS, the chairman of the board of Sefine Shipyard, Demir KOLOĞLU, and the relevant representatives.

The signatories said during the ceremony that the cooperation agreement will be an important and new link in the Turkish defense industry’s path to strengthening high-tech and indigenous systems.

The speakers spoke about the importance of defense industry products with high utility value that will be created thanks to the combination of TUBITAK SAGE and Sefine Shipyard and the capabilities they will add to the Turkish Armed Forces as a deterrent force, saying that in this time when research, development and innovation are urgently needed, the defense industry and R&D are focusing on real needs and products. stated that they are convinced that their cooperation will definitely have highly effective results.

The scope of the cooperation agreement signed between SAGE and Sefine Shipyard can be summarized with the following topics.

Sefine Shipyard has reportedly been developing armed unmanned surface vessels that were unveiled at DIMDEX 2022 in Doha, Qatar. The company offered a wide range of USVs that can be used for different purposes and in different configurations. The convertible trimaran model of the company’s first USV, called the Constellation-class, enables the deployment of different sensors and weapon payloads against different types of threats.

When unveiled at DIMDEX 2022, weapon payloads were mentioned but not specified; the missile to be deployed aboard Constalletion-class USVs has generated curiosity. The Turkish defence industry has so far launched three USV projects (ULAQ, SALVO, SANCAR). All three vessels are equipped with Roketsan’s YALMAN launcher unit, which can carry and launch Roketsan-made Cirit and L-UMTAS laser-guided missiles.

On the other hand, the director of TUBITAK SAGE, Mr. Gurcan Okumus, announced during a press interview in EFES-2022, a joint multinational exercise held in the Aegean Sea between May 18 and June 09, that they plan to conduct a live launch of the Kuzgun- KY anti-ship missile from a USV in the third or fourth quarter of 2022. If we combine the parts, although it is not officially announced, Sefine’s USV seems to be equipped with the TUBITAK missile Kuzgun- KY, and the test firings of the USV should be completed by 2022.

Sefine has also been building the Turkish Navy’s future fleet replenishment and combat support ship, the DIMDEG (abbreviation of Denizde İkmal Muharebe DEstek Gemisi – meaning Replenishment at Sea and Combat Support Ship), which is expected to be commissioned in 2024. The DIMDEG has a relation with these USVs because the future logistic ship will also be a mothership for Sefine-built USVs.

This is an autonomous anti-surface warfare (ASuW) fast attack vehicle with guided missiles designed to meet high-speed, seakeeping, and maneuverability requirements for defensive and offensive ASuW operations in littoral waters.

This variant can reach a speed over 36 knots as well can operate at Sea State 4. The vessel can be fitted with different types of payloads in accordance with the requirements with both monohull and trimaran hull forms as well as optimized for endurance figures. The company didn’t reveal some special features of the vessel due to confidentiality concerns.

The USVs will have an operational range of 600 nautical miles and will be on duty for four days without replenishment. They can be transported by cargo aircraft, naval ships, or land to the mission area.

Thanks to its convertibility into a trimaran with an expandable platform, its payload capacity can be increased to carry more weapons and systems when needed. It will also be able to perform electronic warfare, ASW, and mine warfare missions.

The Kuzgun precision-guided munition is a new-generation product family in the 100-kg class that meets tactical guided munition requirements, is modular in propulsion and methods of navigation or warhead control, has low cost, is reusable, has high hit accuracy and low lateral damage.

As part of the KUZGUN project, TUBİTAK- SAGE is developing three different missiles in solid-fuel (KY), turbojet engine (TJ), and free-fall (SS) configurations. The KY variant is expected to be fitted to USVs, while other variants would be used by the air assets including fighter jets and UCAVs.

The operational ranges of the Kuzgun smart munition/missile family according to variant and launching platforms are given below: