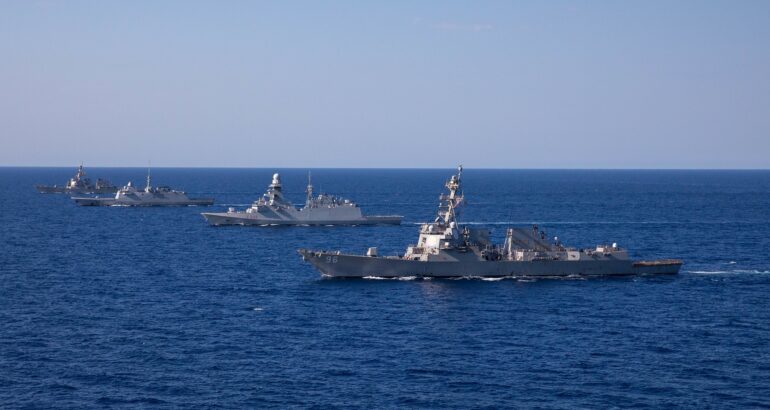 Throughout the recent integration period, the HSTCSG, including Languedoc and Alpino, has conducted surface, sub-surface, and air defense training exercises to further fortify the interoperability between the different forces. Elements of the French, Italian, and U.S. maritime forces routinely operate together, fostering a cooperative approach toward regional security and stability.

“We have been fortunate to conduct integrated operations with several allied and partner nations since arriving in the Sixth Fleet area of operations, including the French and Italian navies,” said Rear Adm. Paul C. Spedero Jr, commander, Carrier Strike Group Eight. “Through our combined operations, we have become more effective, more responsive, and more ready. We are most certainly stronger together.”

“Being part of a U.S. carrier strike group is always a challenge for an escort destroyer like Languedoc, especially in a constrained operational environment as it is now in the Mediterranean since the war broke out in Ukraine,” said Captain Claire Pothier, commanding officer of Languedoc. “Thank to HSTCSG’s staff commitment, my crew has been able to plug quickly with our close U.S. allies in order to provide the group with our cutting edge capabilities in antisubmarine warfare.”

“It has been a real pleasure to operate together in this challenging but rewarding activity,” said Cdr. Danilo Panti, Commanding Officer of ITS Alpino. “This opportunity was an occasion to enhance readiness, strengthen integration and interoperability among the Allies. ITS ALPINO is honored to work alongside so many outstanding and professional sailors.”

This specific opportunity to work as a cohesive team is the latest in a robust and steady integration among these allies. Earlier this year, the HSTCSG sailed with the French aircraft carrier Charles de Gaulle (R 91) carrier strike group and Italian aircraft carrier ITS Cavour (C 550) carrier strike group as all three nations have supported regional exercises and activities like the NATO-led Neptune Strike and Neptune Shield.

Harry S. Truman has also fostered these relationships in recent port visits to Italy and France. The ship called on Trieste and Naples, Italy and Marseille, France in recent months, highlighting the strong and enduring bonds among the allies.

The HSTCSG is on a scheduled deployment in the U.S. Naval Forces Europe area of operations, employed by U.S. Sixth Fleet to defend U.S., allied and partner interests.