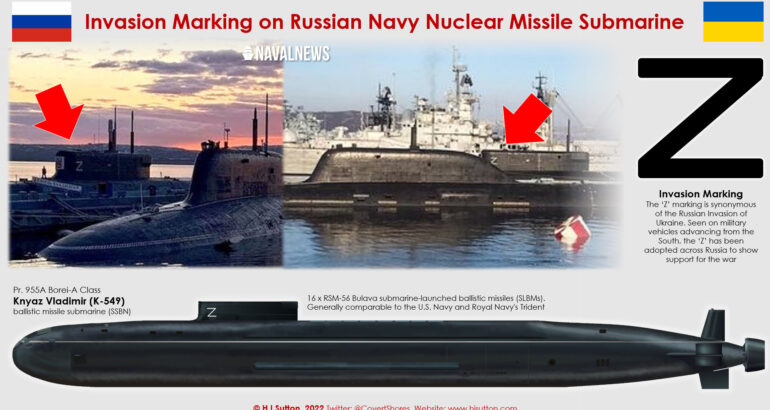 Ballistic missile submarines are at the core of Russia's strategic nuclear strike capability. Each boat can throw around 100 nuclear warheads thousands of miles in a single salvo. The Borei-A class submarine, Knyaz Vladimir, has now been seen with the famous 'Z' marking.

Candid images reveal that a Russian Navy ballistic missile submarine (SSBN) has a ‘Z’ marking on its sail. This has been confirmed by multiple sources seen by Naval News.

The now-famous zigzag marking, used by Russian Troops invading Ukraine, is similar to the letter ‘Z’ in the Latin alphabet. The Russian (Cyrillic) alphabet doesn’t have this letter. So it is sometimes viewed as simply a shape in defense circles. So its appearance on a nuclear submarine is unambiguously related to the war in Ukraine.

A Borei-A class submarine has been photographed, in images shared on Russian Social Media, at Severomorsk in July. A Borei-A Class submarine has also been patrolling in the Barents Sea. Naval news believes that all sightings of the ‘Z’ on the sail are of the same boat, Knyaz Vladimir (K-549).

This submarine normally carries sixteen RSM-56 Bulava submarine-launched ballistic missiles (SLBMs). Loosely comparable to the U.S. Navy and Royal Navy’s Trident, each has a range of over 8,000 km. They carry up 6 to 10 MIRVs (multiple independent reentry vehicles). Each of these can hit with 100-150 kilotons. In short, they are the premier weapon of Russia’s at-sea nuclear arsenal.

A Borei-A has been observed at the missile loading pier in Severomorsk, near Murmansk, during the same time period. So it is likely that the submarine was fully armed with Bulava missiles while sporting the ‘Z’.

The ‘Z’ denotes Russian troops invading Ukraine from the South, mainly from Crimea. Other shapes used resembled an ‘O’, ‘V’ and ‘Z’ inside a box. However the ‘Z’ has become the most commonly seen one, especially as Russia’s invasion axis from the north retreated.

And, almost immediately the invasion started, the ‘Z’ has been the symbol adopted across Russia itself to represent the invasion. It is seen on cars, buildings and murals supporting the war. Even a large mural of a DELTA class missile submarine, recently painted on a building in Gadzhiyevo naval base where the submarine is based, has it.

So its inclusion on an operational submarine likely represents a sign of support for the war. It is unclear whether it was applied officially, with some degree of senior sanction, or at the crew’s initiative. Either way it sends a message that the Ukraine war is not only a local affair.

The Russian government, and President Putin, have been keen to allude to the nuclear threat since the war began. These veiled threats appear to be aimed at NATO who might otherwise by encouraged to help Ukraine more directly. In essence, the nuclear deterrent is being used to enable conventional war.

However other submarines have not yet been seen with the marking. Possibly it is seen as too provocative. For example, two nuclear submarines sent into the Baltic Sea do not have it visible.