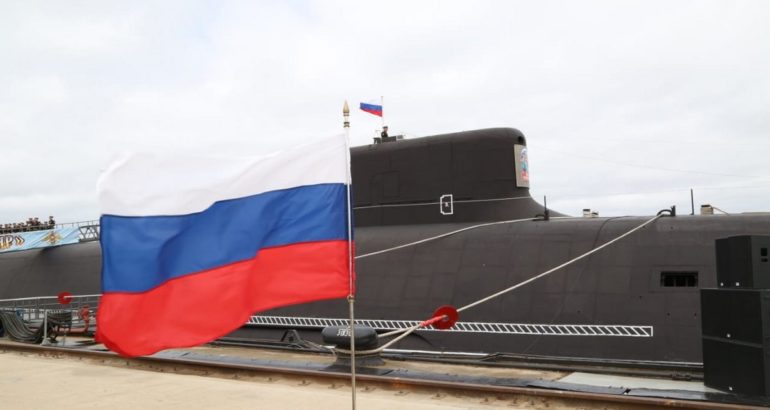 During the ceremony, the General Director of Sevmash Mikhail Budnichenko noted that the nuclear-powered submarine Prince Vladimir (Knyaz Vladimir) became the 133th ship built by the shipyard for the Russian Navy. The Commander-in-chief congratulated the crew for their rigorous training.

“The crew of the strategic missile submarine cruiser Prince Vladimir has undergone training according to the latest programs at the Navy Training Center, has successfully provided testing of the submarine and is ready to use it as part of the Northern Fleet’s Submarine Forces. During the testing period, the crew of the submarine has already managed to prove itself – on October 29, 2019, the intercontinental sea-based ballistic missile Bulava was successfully launched from the waters of the White Sea at the Kura test site in Kamchatka”.

The Sevmash company and the navy signed the act of acceptance on May 28. On June 1, the celebration day of the Northern Fleet, the document was approved by the Chief Naval Officer of Russia, Admiral Nikolai Yevmenov.

The Knyaz Vladimir made a controlling sortie on May 12-21. In December 2019, it successfully completed acceptance trials. The submarine was laid on July 30, 2012. It is the lead SSBN of upgraded project 955A.

According to Covert Shores, the Russian Navy launched its 4th Borei Class ballistic missile submarine (SSBN) in November 2017. K-549 Knyaz Vladimir (Князь Владимир) is the first of the improved Pr.0955A (aka 09552) Borei-II or Borei-A (Borey-A) variant which will form the backbone of Russia’s future at-sea nuclear deterrent. The design incorporates many Western design influences with new tail configuration and sail which resemble US Navy submarines. The first three Pr.955 BOREI Class boats were constructed from unfinished hull sections from AKULA Class attack submarines and OSCAR Class cruise missile submarines. The Borei-A is however completely new-build. Overall dimensions are not significantly altered and internal layout is probably very similar, although the new construction may have allowed some internal redesigns.The most visible difference from the baseline Pr.0955 is the western-style all-moving vertical rudders.

Already three Project 955 submarines are currently in service. The five others expected are 955A. Among them four are currently under construction. The Pacific fleet will receive upgraded submarines of project 955A.