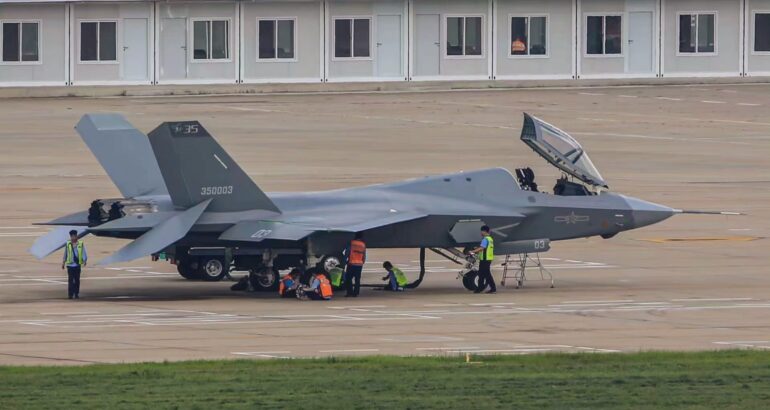 High resolution and detailed photo of the J-35. Click to enlarge.

The high resolution picture shows the third J-35 prototype with tail number 350003 as well as several other interesting details:

Earlier pictures of the unpainted aircraft showed the design features folding wings (to reduced the footprint when stored onboard the carrier). But this is almost impossible to tell when looking at the picture of 350003 (potentially indicating a high level of quality). The aircraft is designed by Shenyang Aircraft Corporation and the picture was likely taken at the Harbin Aircraft Industry Group test facility in Harbin.

In addition, a short video of the J-35 was released today:

The aircraft will be flying from the Type-003 Fujian-class aircraft carriers, the first of which was launched last month. The Type-003 will be massive. It is roughly comparable to the U.S. Navy’s Ford Class. This will be a CATOBAR (catapult-assisted take-off but arrested recovery) design. Thanks to its three EMALS (electro-magnetic aircraft launch system) catapults, it will be able to launch the J-35 as well as KJ-600 airborne early warning & Control (AEW&C) aircrat.

The official designation of China’s new twin-engine stealth fighter aircraft is not known yet. Most open sources calls it “J-35” or “J-XY), some even calls it a variant of the FC-31. A full-size model of the stealth plane first appeared in June 2021 at land based testing facility: A full-sized mock-up of a real Chinese Navy aircraft carrier, located at Wuhan. Naval News‘ regular contributor H I Sutton covered at length the development at the time, pointing out the similarities between the aircraft and the FC-31.

The airframe complies with the new norms of stealthy aircraft design. Carefully aligned angles, a mix of sharp chines and blended surfaces, and sawtooth edges to panels. Over the course of its development, since its first flight in 2013. Three prototypes have flown with the latest, in 2020, being considered closer to a production aircraft.
A internal weapons bay spans the lower fuselage a lot like the F-22. This can carry the PL-15 medium range air-air missile. Like the F-35, additional weapons can be carried in underwing hardpoints. These will increase the aircraft’s radar cross-section so they are not normally seen.