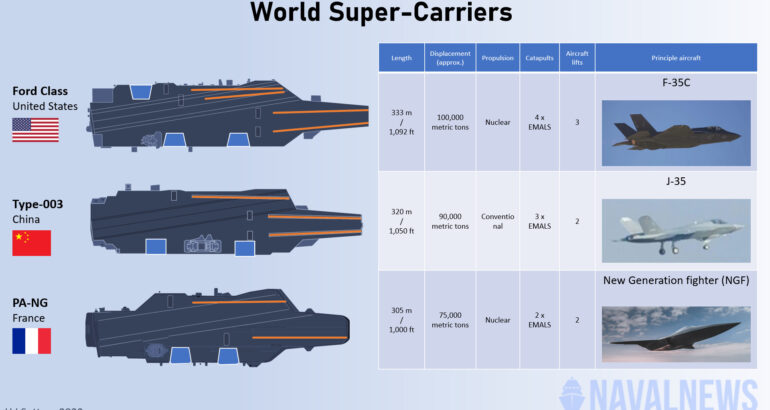 The future of aircraft carriers is assured. Tomorrow's oceans will be more complex and contested, with new threats emerging. Yet the carrier will continue to provide unrivaled conventional superiority to the few navies which can operate them. Only the United States, China and France are building the largest and most capable category of carriers, the Super Carrier.

Warfare is constantly evolving. New technologies are reshaping the way wars are fought and opening up new opportunities for the future. At the same time, existing unit types are proving their worth. This is most visible because of the war in Ukraine. In the court of popular opinion, the effectiveness of anti-tank weapons has caused many to question the future of the tank. Yet on the ground, tanks are still desperately sought by both sides. Similar debates are happening in the naval world.

Navies around the world are increasing, not decreasing, their efforts to build them.

Aircraft Carriers are the pinnacle of capability of any navy, and for good reason. They provide unrivalled conventional superiority over an adversary. The extreme range of aviation assets complicates countering them, such as by ground-based missiles. And their versatility extends from full-on war fighting, through limited war to humanitarian and diplomacy missions.

But only a few countries can build what we’d term super-carriers. A term coined to describe the U.S. Navy’s Cold War giants, there is no clear definition what it means. Until now the large aircraft carriers of other navies have always fallen short. The latest designs from China and France are worthy of the term.

Only 3 nations are going for the most impressive category of aircraft carrier, so-called super carriers. These are the United States, China, and France. Other countries also operate carriers, notably Britain, India, Italy, Spain and Russia. But these are smaller or less capable in some respect. There is no clear definition of a super carrier, but these share key characteristics. They are the largest, can operate larger aircraft (such as airborne early warning planes), and their air wings rival most air forces.

The gold standard for super-carriers is undoubtedly the United States. The current Nimitz-class super carriers are being replaced by the equally large Gerald R. Ford-class. These 100,000 ton behemoths are unrivalled in details, even if the others in this article will come close. Decades of hard-earned experience in super-carrier operations went into the design.

China’s first aircraft carrier, the Liaoning, exercising in the Yellow Sea underlines China’s growing experience and confidence in carrier operations. But the newest Type-003 Fujian-class, which is being fitted out in Shanghai, is the closest to the U.S. Navy’s. It is slightly shorter, but otherwise similar in size.

The Chinese design has conventional propulsion however, compared to the nuclear propulsion of the U.S. Navy design. In principle this gives the U.S. carrier an endurance advantage. Although it needs to be remembered that the ships’ surface escorts and aircraft all need replenishing either way. So the nuclear carrier still needs fleet auxiliaries to operate.

Other aspects of the Chinese design are slightly less ambitious. It only has two aircraft lifts (versus 3), and 3 EMALS (electromagnetic aircraft launch system) catapults. This may reduce its air wing’s sortie rate.

The French Navy, like the U.S., has much more experience of carrier operations. Their current carrier, the Charles De Gaulle, is nuclear powered but noticeably smaller than the American super carriers.

The future PA-Ng (Porte-avions de nouvelle génération) will close the gap. At over 300 meters in length and 75,000 tons, it is only slightly smaller than the Chinese Type-003. PA-Ng will enable the French Navy (Marine Nationale) to retain conventional superiority, and more effectively project power independently or with allies.

The advent of a new generation of ‘carrier killer’ weapons is testament to the continued relevance of the aircraft carrier. China has been building up several anti-ship ballistic missiles (ASBM) and testing them on fake carriers in the desert. Russia too has been developing the Zircon hypersonic anti-ship missile and maintains that the ginormous Poseidon nuclear powered torpedo as an anti-carrier role. It also has the Kinzhal air-launched ballistic missile which is claimed to be an ASBM.

And most recently it was reported that Russia’s Zmeevik land-based ballistic missile will be employed as an ASBM. What this latest project says about Russian confidence in the other systems is unclear. What is clear however, is that carriers still matter to strategic planners.

In a sense they always have mattered.  As high value targets carriers have faced a multitude of threats to their existence. They already faced aircraft, anti-ship missiles and submarines. The new carrier-killer weapons are just the latest generation of threats.

Aircraft carriers, particularly the ‘super carriers’, remain the most powerful warships afloat. But the small number of navies which can operate them, is an exclusive club.