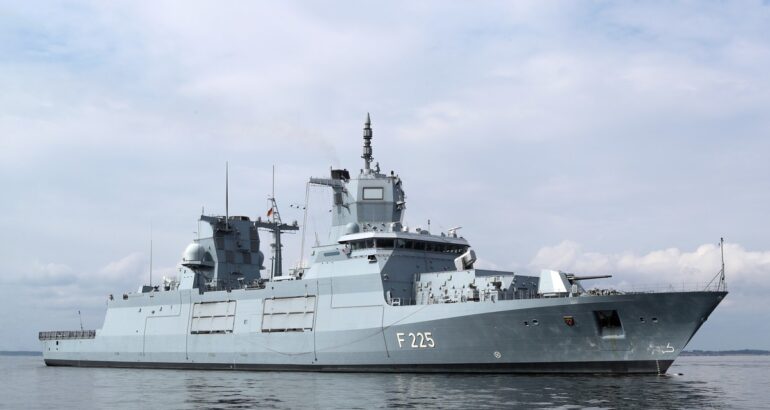 The German Navy (Deutsche Marine) commissioned its fourth and final F125 Baden-Württemberg-class Frigate on Wednesday, July 13, 2022. The "Rheinland-Pfalz" joined the German fleet during a ceremony at Naval Base Heppenser Groden in Wilhelmshaven.

“The fourth and final commissioning of the F125 class represents another important milestone for our squadron and the Navy. This is the first time all four ships are in the Navy’s area of responsibility. With the transfer of the last F125 to the Navy, we gain an additional means for targeted training of all our crews,”

The F125 class frigates are primarily designed for low and medium intensity maritime stabilization operations, where they are supposed to provide sea-to-land tactical fire support, asymmetric threat control at sea and support of special forces.. The German Navy adopted a dual-crew concept this class of ship.

With the Baden-Württemberg-class frigates, the Navy will have a total of four of the world’s technologically leading warships. The frigate type, which has been redesigned from the ground up, has evolved from the German operational experience of the past decades – and is designed for present and future stabilization missions. The task spectrum of the F125 class thus primarily includes maritime surveillance in crisis regions worldwide, such as missions for embargo controls or anti-piracy operations.

Production of the lead ship started in June 2011. The ship was christened in 2013 but delivery, which was scheduled for 2014, was postponed to after 2017 after majors issues were undisclosed by a confidential report May 2017. This report then unveiled that the frigates were overweight and slightly listing by 1.3 degrees starboard. The ship was rejected by the German Navy in December 2017 and returned to its builder.

The issues were corrected in April 2019, when the vessel was finally handed over to the German Navy. First-in-class ship “Baden-Württemberg” was commissioned in June 2019, “Nordrhein-Westfalen” joined the fleet one year later in June 2020 and “Sachsen-Anhalt” in May 2021.