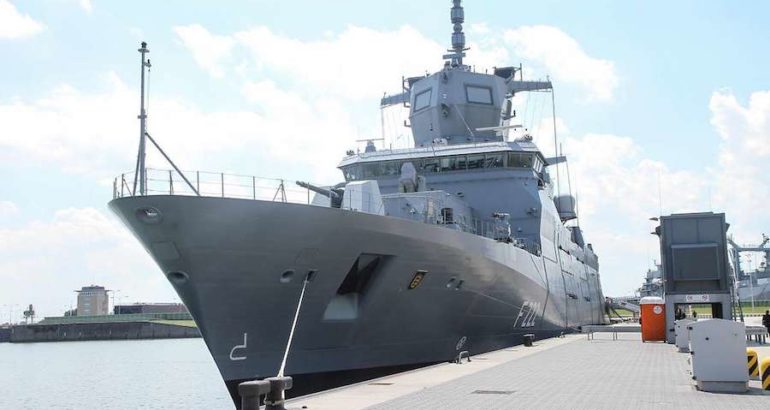 The F125 frigate Die Baden-Württemberg in at the Wilhelmshaven naval base (Credit: Bundeswehr/Kim Brakensiek)

After years of delay, the German Navy officially commissioned the first F125 frigate Baden-Württemberg on June 17, 2019.

“This glow in the eyes of Thomas Müller as he lifted the World Cup in 2014 – that’s exactly the feeling that the F125 crews had today, when I actually could say, ‘Minister, I’m reporting, Frigate, Baden-Württemberg ‘put into service’, » said the frigate commander, captain Markus Venker.

“It was a long way to this day,” the German Defense Minister Ursula von der Leyen said in her speech during a ceremony at the Wilhelmshaven Naval Base. “But most importantly, we’re finally here. And we did that together, Bundeswehr and industry, by finding good solutions.”

“This F125 has certainly given you some gray hair, but now we’re ready to put it into service,” the minister said, pointing to the project’s past problems.

Production of the lead ship started in June 2011. The ship was christened in 2013 but delivery, which was scheduled for 2014, was postponed to after 2017 after majors issues were undisclosed by a confidential report May 2017. This report then unveiled that the frigates were overweight and slightly listing by 1.3 degrees starboard. The ship was rejected by the German Navy in December 2017 and returned to its builder.

The issues were corrected in April 2019, when the vessel was finally handed over to the German Navy. The second class F125 ship, the “Nordrhein-Westfalen” (“North Rhine-Westphalia”), will be ready to be handed over to the customer in 2019. The handing over of the 3rd and 4th ship is planned to take place successively within the next 2 years.

(of which up to 120 regular crew members)