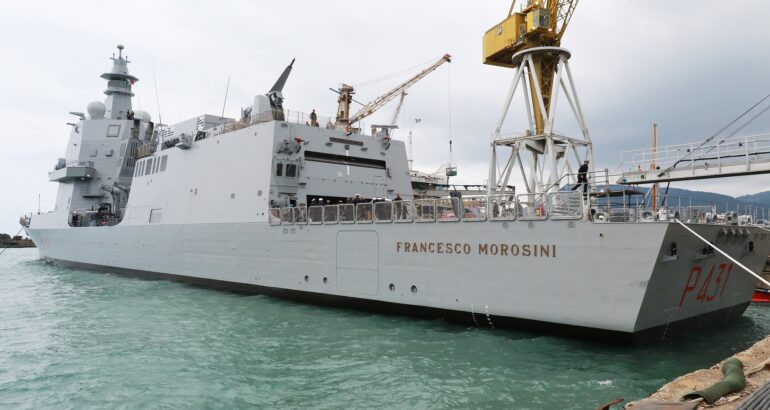 "Francesco Morosini" is the second of seven PPA for the Italian Navy. Fincantieri picture.

The PPAs are part of the renewal plan of the operational lines of the Italian Navy vessels, approved by the Government and Parliament and started in May 2015 (“Naval Law”) under the aegis of OCCAR (Organisation Conjointe de Cooperation sur l’Armement, the international organization for cooperation on arms).

Attended the event, among others, the Chief of the Italian Navy, Admiral OF-9 Enrico Credendino, and the General Manager Naval Vessels Division of Fincantieri, Dario Deste.

The Pattugliatori Polivalenti d’Altura are a new class of ITN combatant platforms which represents a technological and capability jump compared to current generation. Design to conduct a wide range of missions, from maritime security to humanitarian assistance and disaster relief (HADR), the PPAs are being delivered in three configurations (Light, Light Plus and Full) based on common platform and differencing for the new generation sensors and weapon outfit. The Paolo Thaon di Revel (P 430) is the First-of-Class (FoC) and due to the new design and equipment a prototype platform. With an overall length of 143 m, a beam of 16.5 m, a 5m draught and a displacement of ca 6350 tonnes at full load (PPA in the Full configuration), the PPAs are distinguished by a unique hull design featuring a wave-piercing bow for higher speeds, stabiliser fins positioned amidships, a steel hull up to the first level over the main deck, the superstructures divided into main blocks and two modular multipurpose areas respectively amidship and under the flight deck to accommodate a range of equipment to conduct from military to HADR operations.

To learn more, read this story by Luca Peruzzi: