The United States Marine Corps’ Marine Forces Reserve is currently holding a Rapid Acquisition competition to select a new small boat to aid in the Force Design 2030 concept of distributed maritime operations of smaller units and less concentrated force to avoid Anti-ship missiles. Naval News reached out to the Marine Forces Reserve in late November 2022 for further information and comments.

Through new funding allocated to the U.S. Marine Corps’ (USMC) Marine Forces Reserve (MFR), the Marines have seized upon the opportunity to acquire a new boat for their small craft inventory. This new boat differs from the Combat Rubber Raiding Crafts (CRRC) and Rigid Hull Inflatable Boats (RHIB) currently in-service with the USMC and U.S. Navy to better adapt to the new missions presented by U.S. Marine Commandant General David Berger’s Force Design 2030. The philosophy is that smaller boats would not attract as much attention (and hopefully remain undetected) compared to large gray warships and thus the small crafts would not invite firing by the many anti-ship missiles that the pacing threat possesses.

Naval News reached out to the USMC’s Marine Forces Reserve (MFR) via phone in late November 2022 and spoke with a MFR Lt. Colonel who said that the U.S. Marines cannot disclose the competition’s boat vendors or the boats’ specifications until a winner is selected and a contract is signed. The Lt. Colonel did state that this small boat program is under Rapid Acquisition and that the time it will take to deliver the first boats is considered extremely fast in the U.S. military, about the span of a year.

The CSO rapid acquisition process, led by DIU, started with an Area of Interest (AOI) statement posted to the DIU website and subsequently worked through three phases:

• Phase I consisted of reviewing (34) small craft vendor designs/proposals and then down-selecting to (12) vendors (completed in Aug/Sep 22).

• Phase III is the final vendor selection, notification, and statement of work (ongoing, with anticipated completion in late winter). MFR intends to receive the boats in late spring/early summer 2023 and provide them to 4th Marine Division. The planned period of performance for both contract execution and mission concept and limited engineering experimentation sprints is 18-24 months.”

Given time, this planned multi-year procurement of modern small boats and establishment Littoral Craft Companies has the potential to provide the Total Force with small boat experts who can serve as force multipliers in the realm of expeditionary advanced base operations, logistics, security, observation, data collection, signal management, and deterrence for the Navy and Marine Corps Team. This is a win-win opportunity to help the Marine Corps accelerate capability development efforts in littoral operations and to retain talented Marines.

Naval News: Why not just use RHIBs, USSOCOM boats, CRRCs, Mark VIs, or other boats in the DoD inventory?

USMC Marine Forces Reserve: First, it is important to understand that Combat Development & Integration, Capabilities Development Directorate, and the Marine Corps Warfighting Laboratory (MCWL) are leading the Marine Corps’ effort to understand littoral maneuver/small craft requirements. This Service-level effort is being informed by the Active Component and the Marine Expeditionary Forces. Currently, the Active Component is experimenting with more traditional watercraft like RHIBs and CRRCs.

Naval News: How has boat shock mitigation on the body affected the Marines and the final boat decision?

USMC Marine Forces Reserve: Experts from across the Navy and Marine Corps were included throughout the process of vetting the dual-use small craft. From seasoned boat technicians to special warfare personnel, the evaluation panel was comprised of specifically chosen subject-matter experts to assist in selecting the most viable option for experimenting and informing how small craft can contribute to littoral operations. We will continue to leverage and use this expertise going forward.

Human systems integration factors were one of many considerations requested of the craft in the original Area of Interest statement and will continue to be observed and monitored, during the final selection and contract execution.

Naval News: What are the desired crew, passengers, range, endurance, and speed requirements?

USMC Marine Forces Reserve: The next phase of the process includes contract awards to selected vendor(s) and spending the next 18 to 24 months conducting concept and limited engineering experimentation sprints. The original Area of Interest Statement that vendors responded to was written with broadly defined characteristics, as the Service is still working to define specific requirements. These craft will help better inform our perspective across the areas listed above.

Naval News: Will the boats be armed and armored? Do they need a cabin? Are these requirements?

USMC Marine Forces Reserve: It is premature to discuss these specific requirements. Marine Forces Reserve will focus on building a cadre of small boat experts who can generate data for MCWL by experimenting in all the areas needed for evaluation of crew size, craft range, endurance, speed, signature, and many other factors.

Naval News: Is there a unit price target per boat?

USMC Marine Forces Reserve: At this time during the acquisition process, it is inappropriate to discuss procurement prices.

Naval News: How were the boats tested?

USMC Marine Forces Reserve: It is important to note: the demonstrations in Tampa were qualitative in nature, and not formal testing of watercraft. The selected boat vendors presented their craft through static display presentations, answered queries during question-and-answer periods and conducted on-the-water demonstrations to showcase general craft characteristics and capabilities. Additionally, Marines with boat expertise from 3rd Force Reconnaissance Company and 4th Reconnaissance Battalion joined the on-the-water demonstration to provide initial user feedback to the Marine Forces Reserve/DIU selection panel, who evaluated the craft in accordance with the guidelines governing the CSO process.

Formal testing, certification, and approval by appropriate program offices will occur in the future, in parallel with craft delivery.

Naval News: Why boats and not small military/civilian hovercrafts, semi-submersibles, or small patrol crafts with the same comparable requirements?

USMC Marine Forces Reserve: Marine Forces Reserve has been working with MCWL, the command leading the Corps’ effort to understand littoral maneuver/small craft requirements. The boats being pursued by MFR for acquisition are in a category where there is currently a demand for capacity. Although some solutions submitted during the CSO process included additional characteristics, the invited vendors to Tampa ultimately included manned, surface, small craft platforms. The craft are intended to support live-force experimentation, necessary to yield more relevant data to inform Service-level requirements development efforts in this capability area.

The Marine Corps maintains a high interest in the pace of technology advancement, and commands like the Marine Innovation Unit continually consider how emerging, dual-use commercial capabilities can support future concepts.” 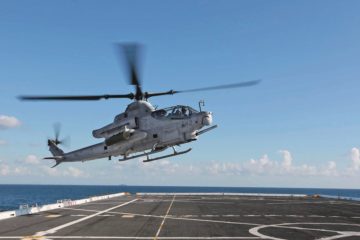