Italian Navy, French Navy to increase cooperation in Mediterranean, Gulf of Guinea and Horn of Africa

Italian Navy (Marina Militare) and French Navy (Marine Nationale) side by side to strengthen dialogue, in the framework of the activities of common interest carried out in the Wider Mediterranean.

The sixth focused patrol of NATO’s Operation Sea Guardian (OSG) in 2020 has commenced, with Hellenic Navy vessel Spetsai as its flagship. 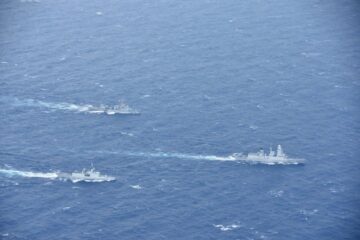 The French Navy (Marine Nationale) announced that it has deployed a Surface Action Group to the Eastern Mediterranean in order to strengthen its presence in the area.

The Hellenic armed forces general staff released pictures and videos of the combined exercise which took place this morning between the Hellenic Navy and French Navy, in the Eastern Mediterranean.

The Russian Navy’s Black Sea Fleet can now deploy its submarines to the Mediterranean. This is despite an international treaty which many thought would prevent it. The Montreux Convention, agreed in 1936, prohibits submarines from passing through the Bosporus Strait, which connects the Black Sea to the Mediterranean. There are exceptions in the treaty for special cases for Black Sea nations