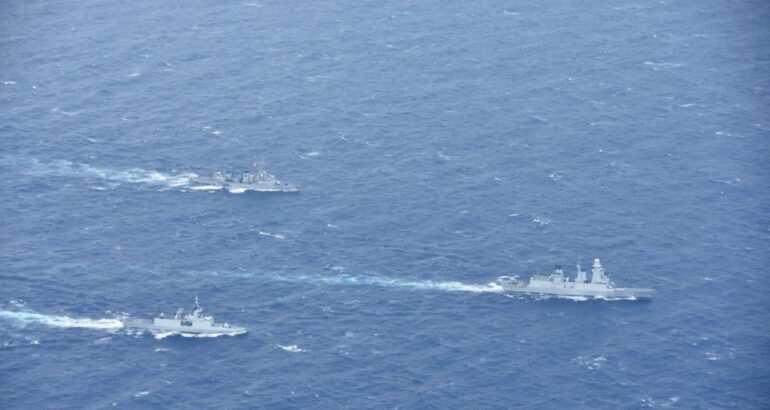 The French Navy (Marine Nationale) announced that it has deployed a Surface Action Group to the Eastern Mediterranean in order to strengthen its presence in the area.

Since November 6, the French Navy has dispatched three surface vessels to form the Surface Action Group (SAG) in the Eastern Med:

This SAG is “occasionally” supported by a French Air Force E3-F AWACS aircraft and a French Navy ATL2 Maritime Patrol Aircraft (MPA). The MPA is currently deployed in Souda on the Greek island of Crete.

La Fayette and Latouche-Tréville were previously deployed for other operations (Chammal and UE NAVFORMED IRINI).

The mission of this SAG is to improve the autonomous assessment of the situation, to manifest in a visible manner France’s presence in the zone, its commitment to the respect of freedom of navigation and its ability to intervene effectively in the event of a violation of international law.

French Ministry of the Armed Forces

The statement added that NH90 NFH helicopter board Forbin and the Panther helicopter aboard La Fayette resulted in several interactions between the SAG’s vessels and enabled coordinated tactical maritime surveillance flights.

Tensions in the Eastern Mediterranean

The move to deploy this SAG is likely in line with the announcement made by the French president back in August about the intent to increase its military presence in the eastern Mediterranean.

The discovery of vast amounts of natural resources in the region in recent years has sparked a prospecting scramble by Greece, Turkey and Egypt as well as Cyprus and Israel. The European Union foreign policy chief, Josep Borrell, qualified the movements of the Turkish navy in the Eastern Mediterranean as “extremely worrying”. The situation deteriorated on Monday 10 August after Turkey deployed a seismic research vessel, the Oruç Reis, escorted by military vessels, in the southeastern Aegean Sea, a disputed area of the Mediterranean rich in gas fields. Subsequently, the Hellenic and French Navies conducted a combined exercise.

Earlier this year, France announced on July 1st that it was suspending its involvement in NATO operation Sea Guardian following tensions with Turkey. The move followed an incident which took place off the Libyan coast on June 10 between French Navy La Fayette-class Frigate Courbet and Turkish Navy vessels (including allegedly Barbaros-class frigate TCG Oruçreis). The Courbet was then taking part in Operation Sea Guardian, having departed Toulon Naval base on 28 May, according to a NATO press release.