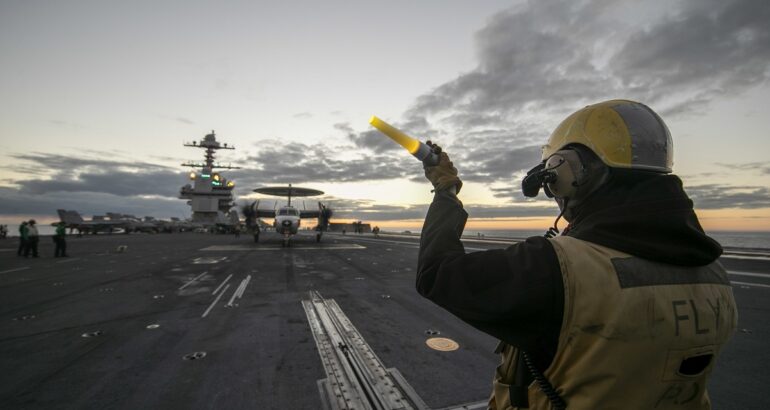 “Recent underway periods have provided my staff and my warfare commanders a greater understanding of how Ford and Nimitz-classes are similar and how they are different, but this underway will enable us to learn how we will fight the Ford-class,” said Rear Adm. Craig Clapperton, commander, CSG-12. “This is another stepping stone to learn, synchronize, and coordinate with fleet stakeholders and mature our processes and capabilities to posture the ship and the strike group for success in their first work up and deployment cycle.”

While this is the first time the entire strike group has operated together, this past May elements of CVW-8 embarked Ford to complete critical milestones that prepared the air wing for this current scale of operations. They conducted cyclic flight operations with thousands of pounds of inert ordnance transported via Ford’s advanced weapons elevators to F/A-18 Super Hornets to be employed during close air support and air-to-ground training missions.

“It’s great to embark our air wing on the USS Gerald R. Ford once again,” said Capt. Josh Sager, commander, CVW-8. “This is an incredible opportunity to exercise air wing missions in a carrier strike group setting, and Team Factory conducted a significant regimen of unit level training in preparations for this at-sea training period. We’re thrilled to continue our integration aboard the flagship of the Ford-lass of aircraft carriers.”

According to Capt. Stefan Walch, DESRON-2’s deputy commodore, the command and control of long-range missile strikes against enemy warships, and the protection of assets in constrained waters are challenging missions that require both technical proficiency and solid unity of command.

“There is no substitute for underway, integrated operations with all of the various staffs that make up the strike group,” said Walch. “This underway will be a huge benefit to building the necessary command relationships and collaboration required to effectively execute our mission.”

Naval News Staff 23 May 2022
The MQ-8C Fire Scout, made its second operational deployment, and first deployment to the Indo-Pacific Area of Responsibility aboard USS Jackson (LCS-6) ...

Peter Ong 19 May 2022
A Naval News reader has tipped us off with the first artwork of the Conventional Prompt Strike (CPS) hypersonic missile on the DDG 1000 Zumwalt-class stealth destroyers.