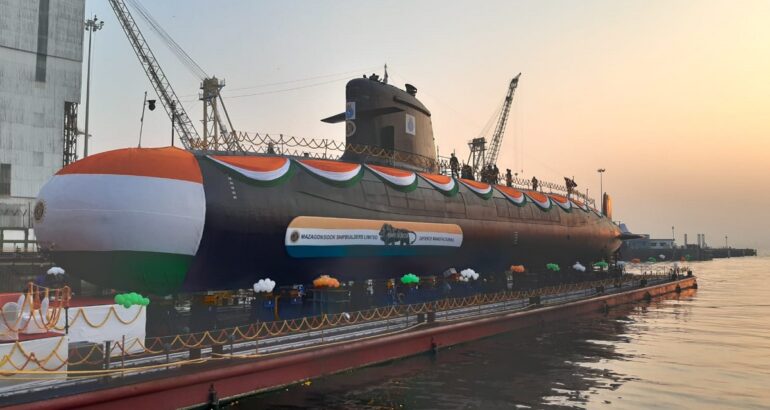 The launch event took place at the shipyard in Mumbai with VIPs attending via video conference because of the health crisis. Vagir is named after the Sand Fish, a deadly deep sea predator of the Indian Ocean.

“The state-of-art technology used in the submarine has ensured superior stealth features such as advanced acoustic absorption techniques, low radiated noise levels, and hydro- dynamically optimised shape and also the ability to attack the enemy using precision guided weapons. With the launching of Vagir, India further cements its position as a submarine building nation. This is in sync with the current impetus of the government towards Make in India and Atma Nirbhar Bharat.”

Six Scorpene-class submarines have been ordered by India in 2005 as part of the Project 75 program. They are constructed locally by the Mazagon Dock Limited shipyard in Mumbai, with assistance of Naval Group, designer of these submarines. Two submarines, Kalvari and Khanderi, have already been commissioned into the Indian Navy. The third and fourth submarines of the class, Karanj and Vela, are conducting sea trials, whilst construction of the sixth and final submarine, Vagsheer, is ongoing.