Home» News»Following the commissioning of INS Khanderi, what is Naval Group’s outlook in India? 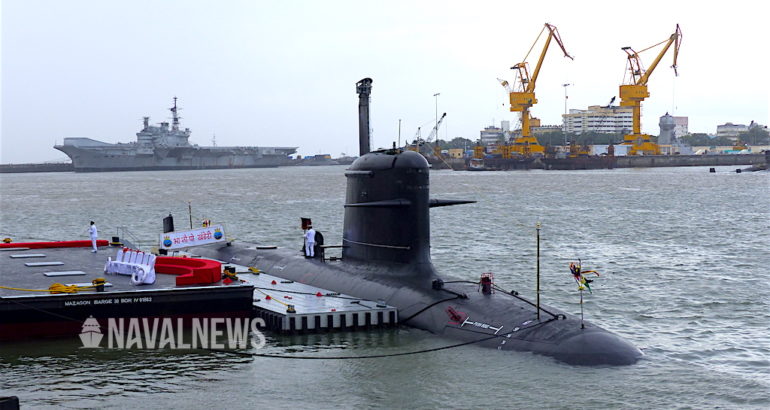 Following the commissioning of INS Khanderi, what is Naval Group’s outlook in India?

On September 28, INS Khanderi was commissioned by the Indian Navy in Mumbai, where the submarine is based.

The ceremony took place in the presence of Defence Minister Shri Rajnath Singh, Minister of State for Defence Shri Shripad Naik, Minister of Heavy Industries and Public Enterprises Shri Arvind Sawant and the Chief of Naval Staff Admiral Karambir Singh, among other dignitaries.

INS Khanderi was launched in January 2017. It is the second Scorpène submarine –of the P75 program– to enter operational service in the Indian Navy. First of class, INS Kalvari, was commissioned in December 2017. Six ships were ordered in 2005 and are due to be entirely build in Mazagon Dock Shipbuilders Limited (MDL) in Mumbai. The fourth Scorpène –INS Vela– was launched in May 2019 and all six ships should be operational by 2023.

P75 is a one of a kind project. While based on the French Scorpène design, construction of the Kalvari-class is the responsibility of MDL, who is directly dealing with the Indian Navy for the delivery of the six submarines. Naval Group is acting as a subcontractor for MDL and the whole program benefits from large transfers of technology (TOT) from Naval Group and its French subcontractors. At the peak of the program, around 300 Naval Group employees participated in the P75 project for the training of MDL engineers and technical personnel, either in Mumbai or in Cherbourg.

“The transfer of technology from Naval Group to MDL encompasses transferring manufacturing capabilities and expertise in quality control for several different tasks, including the safety dive. As a result, Naval Group participated –and still participates– in the training and qualification of skilled local man power. Supporting TOT and the Make In India is an important part of Naval Group India’s missions. Today, we can undoubtedly say that MDL is one of the few centers of excellence around the world with a comprehensive knowledge, infrastructure and manpower dedicated to submarine building.”

Now, the French presence in Mumbai is widely reduced, as the Kalvari succeeded its first operational deployments. The P75 production line is therefore reaching its nominal production speed, with only few corrections to be made after the delivery of each new submarine. Indeed, while three months separated INS Kalvari’s delivery to its commissioning, INS Khanderi commissioning occurs just a week after its delivery to the Indian Navy, on September 19.

“The commissioning of INS Khanderi was initially planned for June but it was delayed because of the monsoon. The Indian Navy wanted to commissioned Khanderi with no pending trials. While some of the acceptance sea trials required good weather and sea state conditions, we had to wait until September to conduct them. Anyhow, P75 program is definitely on track, with MDL delivering one ship every year.”

Make In India on the P75 project

The P75 program is quite unique in the world. Usually, programs conducted under TOT imply that the first ship of a class is either build by the OEM (Original Equipment Manufacturer, in this case Naval Group in France) or assembled locally with modules from the OEM. While P75 contract was signed in 2005, it was clearly specified that MDL will be in charge of the construction of the submarines’ hulls and the integration of all subparts. The only comparable program in recent history is the Collins-class construction in Australia, even if it was more a localized design and production of a new type of submarine with foreign help rather than the transfer of an existing design.

“Transfer of technology is part of Naval Group’s DNA. Our ability to share our knowledge explains our success in India, Brazil and now in Australia. Based on our experience, we know that we have to adapt ourselves to the customer’s needs. It’s not just the customers to adapt itself to our ways of control, teach or training.”

Even if the contract was signed nine years before the Make In India policy was launched, Naval Group made the commitment to optimized locally sourced engineering, development and investments. With support of its subsidiary Naval Group India, the French industrial group managed to transfer at least 30% of the added value of the submarines to Indian subcontractors.

“We sourced, visited and studied the propositions of more than 500 different local companies. Finally, 22 suppliers are already participating in the P75 project, and 21 more have been qualified for future projects. All those companies are slowly but robustly integrated in our global ecosystem. Some of them are already producing parts for exportation, aside from the P75 project. All those 43 companies will then support our current and future activities in India.”

For the moment, Naval Group’s activities in India are mainly focused on the P75 production, alongside the production of gearbox equipment for the P28 corvettes.

Naval Group India, a subsidiary based in Mumbai, employs around 50 persons, including 60% of engineers. Most of them are Indian nationals and they are working on:

The engineers at Naval Group India already contributed to the outfitting and the adaptation of the Scorpène design to Indian Navy’s needs. Some obsolescence of the original design had to be processed, and some modification of the design had to be made in order to adapt to specific requirements.

What’s next for Naval Group in India?

Contrary to what happened in Brazil, there is no life cycle cost maintenance contract between Naval Group and MDL or the Indian Navay. According to Indian tradition, the ships’ repair and maintenance responsibility belongs to the Indian Navy after the end of the OEM warranty. The Indian Navy is then free to conduct most of the maintenance in its own facilities and at MDL shipyards.

Nevertheless, Naval Group India, alongside the 43 qualified Indian companies, are expecting a participation in the submarines’ maintenance and repair programs in the following decades. Their skills and expertise on the P75 systems should allow for faster and cheaper maintenance.

In addition, Naval Group India engineers are already working with DRDO for the integration of an Indian designed AIP module. Initially, the 5th and 6th submarine should have received an AIP plug. But due to delays in the propulsion module design at DRDO, it was later decided that the AIP plug will be retrofitted to each Kalvari-class submarine during their first normal refit that occurs every 7 years.

Naval Group and its Indian partners are also competing in any Indian Navy program. They are proposing their Canto and F21 designs for the decoys and heavyweight torpedo project under MII. But Naval Group is also eager to offer its design and industrial knowledge in all major Indian Navy programs, from the Next Generation Missile Vessels corvette to the LHD or aircraft carrier programs.

It was also confirmed to us that Naval Group is interested in taking a stake in MDL, which is now a state-owned enterprise of the Government of India. In 2018, MDL share-sale has been postponed for a first time. Few days ago, the initial public offering (IPO) of MDL has been shelved once again and defered to an unknown date.

What can we expect from Naval Group proposal for P75I ?

Project 75-India is due to be the follow-on of the Kalvari-class. Six new submarines are due to be built in an Indian shipyard under Make In India, meaning that at least 50% of the added value has to be produced in India. At the origin of P75 and P75I, the Indian Navy wanted 24 conventional submarines from two different foreign manufacturers, which could have ended Naval Group’s hopes on the P75I.

But the considerable delays in submarine procurement in India offers new opportunities for the French group. Indeed, multiplication of foreign acquisitions and TOT could only help indigenous designs if the programs succeed one another in a timely fashion. When MDL started the production of the Kalvari-class, the knowledge acquired while building the Shishumar-class in the 1980s was already fading away.

On the contrary, developing a strategic long term partnership with a single OEM could lead to a fast growing local industry and a successful indigenisation program, just like the South Korean KSS-I, KSS-II and KSS-III programs.

Last April, the Indian Navy has issued an Expression of Interest for six submarines under the P75I project. France’s Naval Group, Russsia’s Rosoboronexport, Germany’s TyssenKrupp and Sweden’s Saab are the main contenders in the tender. But the choice of the shipyard is also a major political and industrial concern in this project.

Compared to P75, the P75I submarines will have to be bigger ships, with AIP propulsion, the ability to carry a dozen cruise missiles alongside the torpedoes and anti-ship missiles. Such requirements made the Scorpène unsuitable for the P75I.

Naval Group is therefore thinking about a whole new design for the Project 75I. As Naval News learned from Naval Group officials, “it will neither be a stretched Scorpène derivative, nor a Barracuda family derivative”. French proposal for P75I could then be a new design displacing around 3,000 tons specifically adapted for Indian Navy needs.

While the Scorpène is a best seller in the 2,000 tons-category, the Barracuda design is in a league of its own, in the +5,000 tons-category. A new 3,000 tons ship could fill a gap in Naval Group products family and allow the French company to compete with the Russian Lada-class, Japanese Sōryū-class, Chinese Yuan-class or even Spanish S-80 Plus design.

It is still unclear if such a new design, if selected, will be made solely by Naval Group’s teams or in cooperation with Indian shipbuilders.

Nevertheless, Naval Group officials confirmed that, in order to achieve the 50% of MII, the TOT can’t focus solely on design work and mechanical production. The transfer of technology will then have to include the Combat Management System that is currently one of the key features of Naval Group submarines.

“On P75I, we are well placed to be selected by the Indian Navy. The entire P75 program went very well and we are now partnering with the Navy for the maintenance and repair of all the Kalvari-class submarines. After what was accomplished on the P75, we are the only company in the world to have demonstrate complete TOT on a major submarine program.”

INS Khanderi by the numbers

Reporting from Mumbai by Yannick Smaldore, editing by Xavier Vavasseur