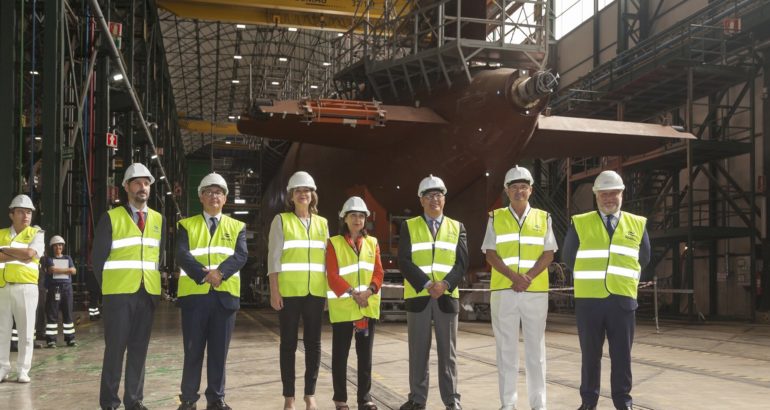 Navantia Reports on the Progress of the S-80 Submarine Program

Acting Spanish Minister of Defense, Margarita Robles, visited Navantia's Cartagena shipyard this week, where she has been shown the current progress of the S80 submarine program, a priority to meet the needs of Spain's national defense strategy.

The program is fully consolidated, technically and programmatically, with the first unit in the final phase of construction to begin the testing and launching phase in 2020. Navantia has thus overcome one of the greatest engineering challenges in its history, having developed unique capabilities in design and construction of conventional submarines.

According to Navantia, Spain has now joined the select group of countries that have the capacity to design and build submarines. This fact is due to the intrinsic difficulties of designing a system that must be able to operate autonomously in extremely hostile environments for long periods of time and that requires highly specialized knowledge in very diverse disciplines (materials, hydrodynamics, mechanics, acoustics , etc.) as well as having a highly qualified and specialized industrial and technological support base.

The S80 program generates an estimated 2,000 direct job annually, and up to 7,000 including employment that involves the drag effect on the supply chain and generated by the income effect. The latter represents 10% of industrial employment in the Region of Murcia.

Navantia says it is prepared and has a solid industrial and technological base to enter the international market with this product. It is currently competing with other European shipyards in the competition for the replacement of the four Dutch submarines of the Walrus class. It is also participating in another international competition for the construction of 6 submarines in India (P-75I).

About the S80 SSK

The S80 class (or Isaac Peral class) are AIP (air independent propulsion) submarines currently under construction for the Spanish Navy. Four boats have been ordered, all are under construction by Navantia at its yard in Cartagena. Construction of the submarines had been suspended in early 2013, when it was found that the first submarine in the series, the Isaac Peral, was 75 to 100 tons too heavy relative to its length. General Dynamics Electric Boat was brought in by Navantia through a Foreign Military Sale in 2013 to tackle the weight distribution issues. Each submarine has been stretched with a 10 meters ring to better distribute the weight of the submarine. The intended delivery date of the first submarine is December 2022.