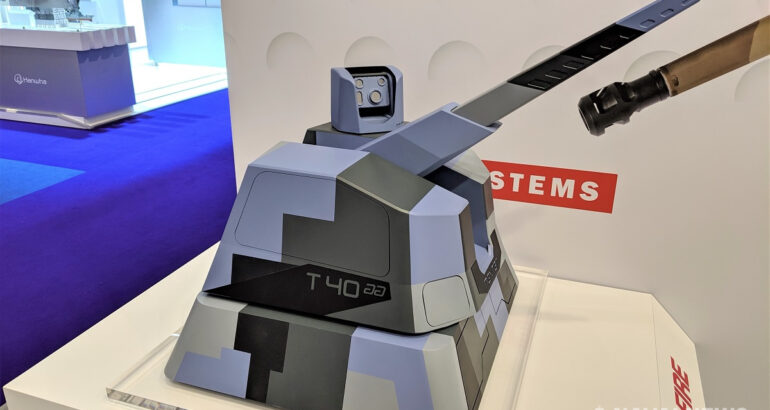 Scale model of RAPIDFire on Thales stand at DSEI 2019.

Are the future French Navy OPVs set to get the new RAPIDFire 40mm naval gun system ?

The OPV replacement program was announced in June 2020 following a Ministerial Committee on Investments. These vessels are « indispensable both overseas and in metropolitan France to carry out the state’s missions at sea. Consequently, we have made filling this gap one of the priorities of the military planning law », Parly said on October 6 to the House of Representatives Defense Committee.

The French Navy future OPVs are divided in three sub-components : a first batch of « Patrouilleurs d’Outre-mer » (POM) for Antillas and French Guyana, another six POMs for the other overseas territories (2 in New Caledonia, two in la Réunion and two in French Polynesia), and 10 POs which will replace the Patrouilleurs de haute mer based in Toulon and Brest and the much lighter and unarmed  « Patrouilleurs de service public » of Cherbourg. The first two POM OPVs are to be delivered by Socarenam by 2022-end.

About the existing PHM, « I confess the status of these patrol vessel is not brand new and that their availability is lacking, » Parly added, announcing that measures for speeding things up have been taken « to ensure the first two PO units will be delivered before 2025 ». As of now, no contract has been notified and the exact design remains unknown.

The only certainty is that the POM and PO will be slightly different. « We have made structuring choices since the operational capacities of these new vessels will be much greater than those currently available, » the French Armed Forces minister stressed.

While the POM is a smaller, lightly equipped 1,200-tons vessel, the 10 POs will adopt a 2,000 tons design which will allow them to embark a helicopter and to be fitted with a sonar and larger weapon systems. Answering a question from the delegate Didier Le Gac, in charge of the French Navy 2021 budget, the Defense Minister gave a few more details about some of the PO’s armament, citing for the first time « a 40 mm gun ». Naval News understands this system is likely to be the Thales-Nexter RAPIDFire naval gun system.

The RapidFire has already been selected for the French Navy’s future fleet of replenishment tankers. Nexter and Thales won the tender facing Leonardo with the MARLIN 40mm, Rheinmetall with the Oerlikon Millenium gun 35mm, MBDA with the SIMBAD RC surface to air missile system and BAE Systems Bofors with 40Mk4 40mm. Even if an official confirmation of the RapidFire selection is yet to be made, a notification of the contract reportedly occured in January for developement and delivery of an initial batch.

RAPIDFire is a weapon system which offers high precision thanks to its optronic fire control system integrated on the turret, its advanced algorithms, powerful gun and automatic ammunition management system allowing the best reactivity and efficiency for the operator. RAPIDFire incorporates a 40 mm gun developed by CTAI, the international subsidiary of Nexter Systems and BAE Systems, to equip latest-generation armoured vehicles for the French, Belgian and British land forces. The system is compatible with the full range of amunitions developed for land forces programmes including general purpose (GP) and APFSDS as well as the new smart Anti Aerial Airburst (A3B) rounds.

With its combination of fast-into-action time and firing accuracy, RAPIDFire provides the perfect response for protecting Navy vessels against modern threats. It has the potential to become a key component of our extensive offering of advanced force protection solutions.

Xavier Vavasseur 17 Oct 2021
French shipbuilder Socarenam launched the first ship in a new class of Offshore Patrol Vessels (OPV) for the French Navy. The "Auguste Benebig" was launched at the Socarenam shipyard in Saint Malo (Brittany) on 15 October 2021 as part of the POM (Patrouilleur d’Outre-Mer) program.

Naval News Staff 13 Oct 2021
The third of the four Argentinian offshore patrol vessel (OPV) ordered by the Argentine Navy, OPV 87 A.R.A. Storni, was delivered on October 13 in the presence of Captain Santiago Villemur representative of the Argentine Navy in France.