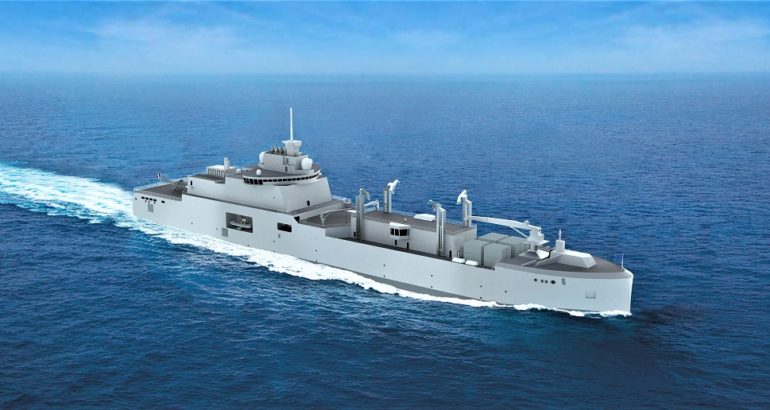 The construction of the first of four new replenishment tankers / supply vessels for the French navy (Marine Nationale) started today at the Chantiers de l’Atlantique shipyard in cooperation with Naval Group. The future vessels will be known as the Jacques Chevallier-class.

A first steel cut ceremony took place in presence of French Minister of the Armed Forces, Florence Parly, and the Chief of Staff of the French Navy, Admiral Prazuck, at the shipyard in Saint-Nazaire. This ceremony symbolically marked the start of construction for the first BRF replenishment tanker (bâtiment ravitailleur de force or force replenishment vessel) of the “Logistics Fleet” (FLOTLOG) program.

This day is important for our armies, for the French Navy and for our defense industry. Our three current tankers will be replaced by four double-hull vessels to protect the oceans from any oil incident. We will need this excellence that has made you known worldwide because it is here, in Saint-Nazaire, that the new generation aircraft carrier will be built which will replace the Charles de Gaulle in 2038.

It was revealed that the first-in-class ship will be named after Jacques Chevallier, famous for his work in the field of nuclear propulsion. This engineer designed the nuclear propulsion system of the first class of French SSBNs.

Chantiers de l’Atlantique and Naval Group were awarded a contract for the construction of four supply vessels in January 2019. The vessels are set to be delivered between the end of 2022 and 2029.

It is part of a Franco-Italian program led by OCCAR (Organisation Conjointe de Coopération en matière d’Armement – Organisation for Joint Armament Co-operation), on behalf of the French defense procurement agency (DGA) and its Italian counterpart NAVARM. As such, the design of the French BRF design is based on the Italian Navy LSS (Vulcano-class) designed by Fincantieri.

Chantiers de l’Atlantique is in charge the design and construction of the four ships. It is responsible for the integration and assembly of the onboard systems.

“We are at the beginning of a new industrial history, which will allow us to demonstrate once again our know-how in all our businesses as a designer, builder and integrator of high-level technologies. It will also be a very good opportunity to illustrate the complementarity of our activities with those of our partner Naval Group”.

Naval Group is charge of the design, development, and integration of the ship’s military systems (aviation, ammunition, immunization). The company is also responsible for certain functions such as cyber security, electromagnetic compatibility…. The combat system of the four ships – based on Naval Group’s Polaris combat management system – provides protection against close-in threats as well as asymmetric threats.

“Naval Group is proud to be once again present alongside Chantiers de l’Atlantique in the framework of this European programme. This cooperation, which brings together the best expertise from the civil and military sectors, is beneficial both economically and operationally for our customers,”