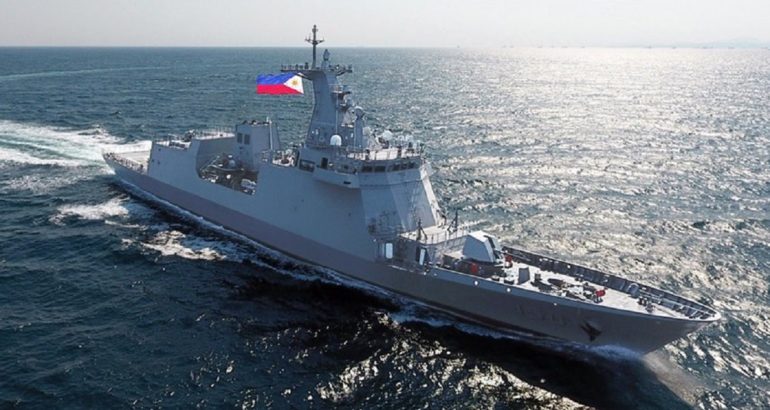 The first of the Jose Rizal-class frigate, which is sailing with relief supplies donated by Korean government, is set to be commissioned with the Philippine Navy on May 23, 2020.

The frigate is transporting a shipment of COVID-19 relief supplies donated by the Korean government as part of its campaign to assist countries that participated in the Korean War. Just last week, the United States received 500,000 masks delivered by ROKAF C-130J.

Around 20,000 protective masks, 180 barrels of disinfectant solution, 2,000 bottles of hand sanitizer, and 300 packs of disinfectant wipe are among the cargo being shipped to the Philippines aboard the BRP Jose Rizal.

The Jose Rizal frigate was launched in 2019 by HHI in Ulsan, South Korea. She started sea trial near in South Korean waters in November last year.

The commission was expected originally on April 18. but due to the ongoing pandemic, it had to be pushed back. Once commissioned, it will become the Philippine Navy’s first-ever guided-missile frigate.

The Philippine frigate have four anti-ship missile launchers (presumably, for South Korean SSM-700K Haeseong / C-Star by LIG Nex1), two SIMBAD-RC short range SAM system by MBDA, a 76-mm main gun, one Aselsan SMASH 30mm secondary gun, two 324-mm three-tube torpedo launchers (presumably for K745 Chung Sang Eo / Blue Shark torpedoes by LIG Nex1). They are fitted for but not with an 8x cell VLS for surface to air missiles. The ship has an helicopter deck and hangar to accommodate a Leonardo AW159 Lynx Wildcat helicopter (two such helicopters have been ordered for the Navy of the Philippines). Most of the sensor and electronic suites are provided by Thales.

The order of these two frigates represented an historic breakthrough for the Philippine fleet, which was so far composed of mostly ageing and outdated escort and patrol vessels transferred (used) from the United States. As a result, the Philippine fleet is one of the oldest in the world, and it still includes former US ships built during the Second World War.