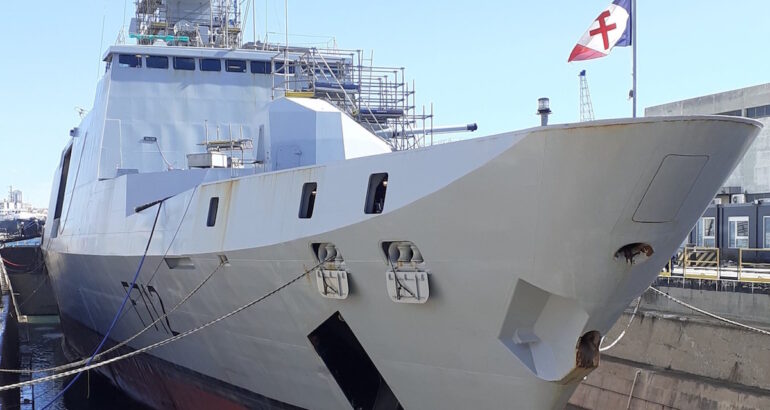 The Courbet in Toulon's dry dock, on October 5, 2020. The renovation work will last 10 months.

In 2017, the DGA (French Defense Procurement Agency) awarded the contract to upgrade three of the five La Fayette-class stealth frigates (FLF) operated by the French Navy. Synchronized with the scheduled overhauls of the three frigates, the modernization process started earlier this month.

On October 5, the Courbet was put in the dry dock at Toulon naval base. It will then undergo a full refit before returning to the French Navy active service in 2021. Its two sister-ships Aconit and La Fayette will follow the Courbet in the dry dock. Together, the three modernized “light stealth frigates” (or FLF as they are dubbed in the French Navy) will remain in active duty after 2030, when they will be replaced by newly built FDI frigates.

The FLF’s renovation will cover both the platform and the combat system. It will include renovation work on the structure, allowing a longer than expected operational life. The electronic and IT systems used to manage the vessel’s installations (such as propulsion, steering gear or power generation) will be renovated or replaced.

The FLF renovation program is not only due to increase the life-time of the frigates while waiting for the new FDI. This modernization aims to improve the combat capabilities of the class, particularly toward new threats.

The obsolete CROTALE anti-air warfare system will then be replaced by 2 renovated SADRAL launchers. Those launchers came from retired F70 frigates. They will be renovated in order to operate the new MISTRAL Mk3 missile from MBDA. If the Mistral 3 missile doesn’t have the range and payload of the Crotale, it is adapted to counter new asymmetrical threats. Alongside its anti-aircraft and anti-missile ability, the Mistral 3 can destroy fast surface vessel, including USVs and fast attack boats.

For the first time in the French Navy, the Lafayette frigates will have some underwater combat capacities. The three selected ships will receive a KingKlip Mk2 hull-mounted sonar from Thales. It is the same model selected for the FDI frigates. For self defense, they will receive anti-torpedo countermeasures.

It may be noted that a fourth Lafayette-class frigate, the Surcouf, already received a sonar. In this case, it is a smaller BlueWatcher sonar, also from Thales. But, for now, the Surcouf is not due to benefit from the ongoing FLF modernization program.

Q&A with Naval Group about the FLF modernization

Naval Group, which designed and built the FLF in the 1990, was selected by the DGA to conduct the industrial modernization work on the three Lafayette frigates. We were able to ask some question to the program manager about this renovation program.

What is the role of Naval Group in this project?

Naval Group teams will carry out modernizations, replace equipment and add new capacities to the building.
The work will mainly affect three main areas: the hull, the handling of the platform and the combat system.

What is the duration of the work required for a single frigate?

The La Fayette frigate renovation and modernization program started with Courbet. On Monday, October 5, the Courbet was taken out of the water and put in the dry dock.
This project will last nearly 10 months, including dock and sea trials.
Since the contract was signed in 2017, the teams spent one year on the design stage followed by two years of development. Site preparation was launched in early 2020.

How many Naval Group personnel does this mobilize?

All of the group’s sites are affected.

What is the greatest difficulty of this site?

Carrying out this modernization project within a tight schedule and, de facto, taking into account a high density of activities on board. If we add the maintenance operations and the work on existing programmes, all the sections of the frigate are concerned, from the bow to the stern. With in particular the installation of a prefabricated hull block in Lorient for the installation of the new hull mounted sonar.