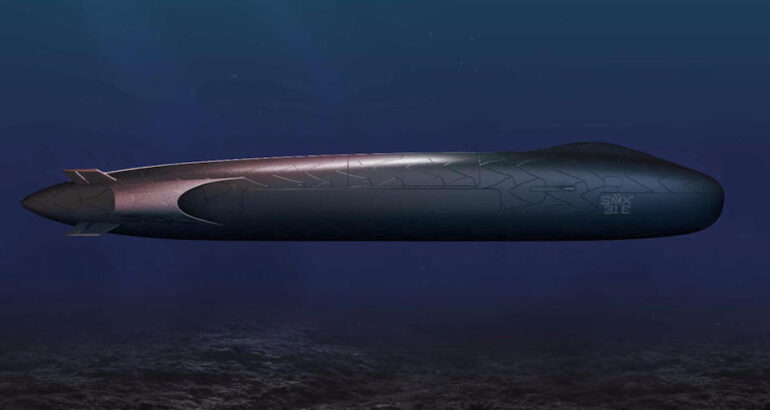 During Euronaval Online, Naval Group unveils an evolution of its previous "concept submarine”, the SMX31E. This ambitious design merges all the new technologies that Naval Group is exploring. If such an innovative design won’t be operational before the 2040s (if ever), some of the proposed systems and technologies will likely be ready for operations in the following years or decades.

Two years ago, for Euronaval 2018, Naval Group presented a new “concept ship” submarine, the SMX31. The design was then very radical, with the elimination of the sail and the aft propeller, and an overall biomimetic shape that reminds a humpback whale or a sperm whale. For Euronaval 2020, instead of a completely new concept submarine, Naval Group chose to unveils an upgraded version of the SMX31. More realistic and using accurate technologies, the new SMX31E better reflects what a future submarine could be circa 2040.

Even if it is a concept submarine, the new SMX is designed as an operational boat, and a rather big one. With a length of 77m and around a dozen meters wide, the SMX31E has a displacement of 3.200 tons. It is then bigger than the current Scorpène-class submarine sold by Naval Group to Chile, Malaysia, Brazil and India.

Despite its large dimensions, the SMX31E has a crew of only 15 sailors and officers, with room for additional commandos. Based on the current evolution of underwater technologies, Naval Group foresees higher levels of automation for future submarines. The maintenance at sea will also be drastically reduced, mainly due to the new fully electric design of the boat.

While the previous SMX31 was displayed with VLS and up to 46 weapons, the SMX31E offers a more realistic (and versatile) payload. Up to 24 heavy weapons can be carried by the submarine, only from horizontal tubes. They can be launched from forward-firing lateral torpedo tubes, but also from the rear mission bay, firing backward. Aft torpedo tubes will then be used to launch weapons but also to launch and recover autonomous underwater vehicles (propelled drones, gliders, sono-buoys…). The back of the SMX31E will also integrate two large modular bays able to deploy XL UUV. These oceanic underwater drones, that are still to be developed, will greatly improve the submarine capabilities.

Think out the submarine of tomorrow

Most of the ideas developed for the SMX31E can be adapted in the coming years into already existing submarines (Scorpène class, or more likely Barracuda family) but also on the new submarines and UUVs that will be designed by Naval Group.

Since the SMX31 was unveiled two years ago, Naval Group listened to its partners and potential customers’ remarks and advices. But the French company also took into account the remarkable breakthroughs made by others in the underwater domains. In launching the first Li-ion battery submarine, the JSMDF has shown the next level in submarine propulsion domain.

The energy distribution of the SMX31E has then evolved. The numerous Li-ion batteries are then an important part of the total weight of the concept submarine. Placed inside and also outside the pressure hull, they are designed to be redundant and to be easily replaced and upgraded. These batteries provide energy to the CMS, but also to the two electric engines placed outside the pressure hull, on the rear flanks of the SMX.

As a fully electric submarine, the SMX31E has no diesel generators to charge the batteries at sea, and no AIP module either. It carry no fuel, as its batteries generate enough energy for more than 60 days of operations at 5 knots, and more than 30 days at 8 knots. The SMX31E is then able to conducts submerged missions for as long as today’s nuclear submarine.

As already shown by the JSMDF, it’s more than plausible than Li-ion battery can integrate Scorpène or Barracuda design. Naval Group’s R&D is indeed very advanced in the underwater Li-Ion battery uses. Nevertheless, if LIB can replace or complete a conventional or AIP propulsion, a fully electric submarine will require an entire new design, like the SMX31E.

As every “concept submarine”, the SMX31E presents an excellent acoustic and advanced stealth technologies. Like the SMX31 two years ago, the submarine’s stealth is insured by its very hydrodynamic shape. On the SMX31E, a proto-sail has been added, in order to allow easier handling while navigating on surface, during harbor entrance and departure for example. But the overall shape still reminds a whale or a large fish.

The entire SMX31E is also covered by acoustic tiles. Contrary to the SMX31 of 2018, those tiles won’t act as sensors. In the more realistic design of the SMX31E, the submarine is equipped with conventional bow and flank sonar antennas.

But the SMX31E will be able to deploy its own underwater tactical network, and to connect itself to future extended underwater battlefield. The small and large UUVs carried by the boat could deploys remote sensors.

A concept for future submarines

With improved sensors, increased mobility, remote sensors and access to a distributed underwater network, the SMX31E will have an operation area ten times larger than a Scorpène today.

According to Naval Group, the SMX31E could very well become an operational submarine. It will require 10 years of development, and another decade for construction and sea trials.

More likely, the SMX31E will remain a concept submarine. But some of its sensors, energy architecture and operational approach will likely integrated current and future submarine designs.

In 2014, Naval Group (DCNS at the time) unveiled its SMX Ocean. If it never became an operational design per se, some of the advanced technologies proposed on SMX Ocean will be found on the future Attack-class of the Royal Australian Navy.