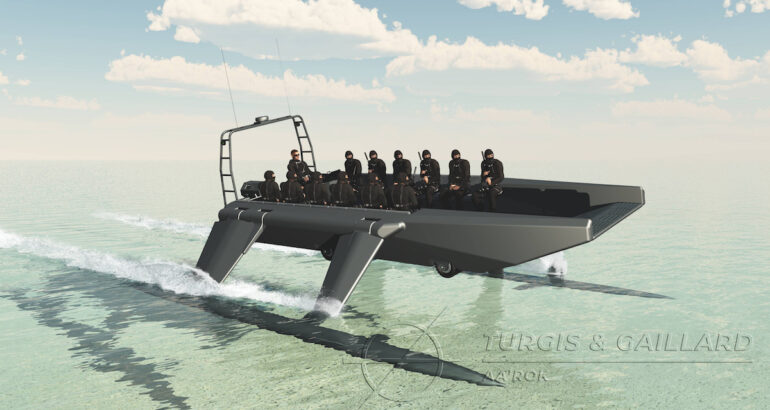 Before the cancelation of the on-site Euronaval 2020, the French group Turgis & Gaillard planed to present a model of its Kraken assault boat.

Turgis & Gaillard is a French industrial group founded in 2011. Already present in all French defense sectors as a supplier, Turgis & Gaillard also innovates within the civilian nautical industry, with its SunWave solar vessels. And, like another French company Iguana Yacht, Turgis & Gaillard drawn on the experience gained with SunWave in order to propose a dedicated military amphibious assault boat, the Kraken.

The main hull of the KRAKEN is typical of a flat-bottomed landing barge. During beaching operations, the bow of the KRAKEN can be lowered. It then serves as a loading/unloading ramp for the commandos, their equipment or even for autonomous ground vehicles.

Alongside the main hull, the KRAKEN is equipped with two variable geometry pods. Shaped like some kind of retractable hydrofoils, they are designated by the designers as Submarine Adaptative Hull Concept (SAHC). According to the KRAKEN speed, course and mission, the SAHC will automatically spread. As they are equipped with ballasts, the SAHC will adapt their span and depth to precisely control the boat speed, stability and visual discretion. Ultimately, the SAHC are used to optimize the energy management of the craft.

Under its main hull, the KRAKEN is equipped with several rows of motorized wheels, making it a fully autonomous amphibious craft. If the KRAKEN is used as a ground based interceptor, those wheels allow autonomous operations without any ground based vehicle or facilities. When the KRAKEN is manned by sea based special forces, the wheels facilitate the boat’s movement on a beach, for example to hide it during the mission duration.

Compared to other amphibious assault craft, like Iguana Pro Interceptor, the major advantage of the KRAKEN is its loading/unloading ramp. Just like a small landing barge, the KRAKEN allows faster disembarkation of troops and equipment, including unmanned ground vehicles.

For humanitarian mission or evacuation of civilians, this feature also offers safer, faster and more efficient handling of stretchers.

On the longer term, if the KRAKEN concept proves useful, Turgis & Gaillard could be able to design other electrical variable buoyancy boats. With a low environmental impact, a good range and a versatile configuration, such fast landing craft can find many utilities for law enforcement in sensitive ecological areas, for example.