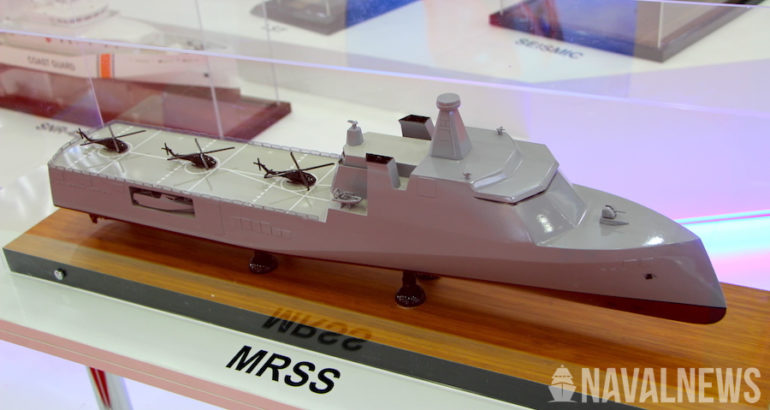 TAIS unveiled its proposal for the Royal Malaysian Navy’s potential Multirole Support Ship (MRSS) request, Naval News spotted today at LIMA 2019 exhibition. The RMN « 15 to 5 » transformation program involves the acquisition of three MRSS ships, the two first of which being delivered between 2021-2025 and the third one by 2035 - Naval News.

Regarding the MRSS, the Chief of the RMN Admiral Reza told Naval News that he is « still negotiating with the government to make sure it becomes a reality in the near future ».

In the meantime, at least four shipyards are now shaping their offer with a view to a potential RFP. Besides TAIS, other competitors include the Dutch Damen, France’s Naval Group and a Chinese shipyard. The Turkish yard MRSS ship may fulfill several roles, from amphibious operations support, force projection, and humanitarian and disaster relief operations.

The MRSS adopts a modern and stealth LPD design, mainly relying on a 2000 m2 flight deck which can spots up to three medium-sized helicopters, while two more can be stored in the flight deck hangar.

A LARS system will be mounted on the right side for Fast Interceptor Craft launch and recovery.