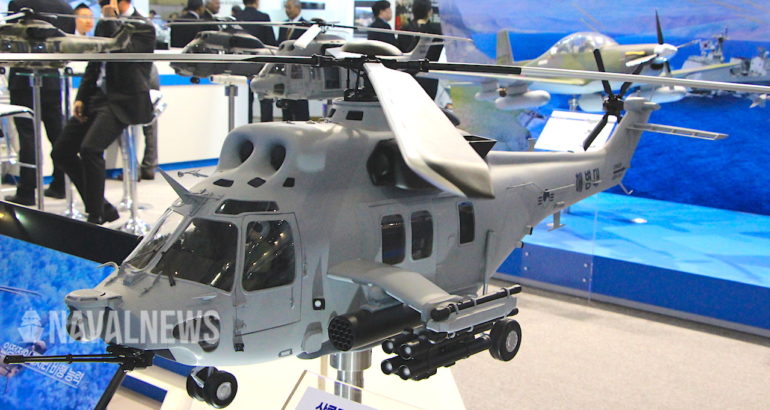 When the Korean Marine Corps got its two first MUH-1 « Marineon » in 2018, they became the first major aircraft the 29,000-strong force received since its integration in the ROK Navy in the early 1970s. By introducing new variants, KAI is proposing locally made solutions as the ROK Marine Corps is moving forward towards creating an independent air unit by 2021. Besides the Marineon, the future air component of the « Korea Marine Air-Ground Task Force » will also operate attack choppers. The two others contenders are the Bell AH-1Z Viper and a naval version of the Boeing AH-64E Apache helicopter.

The MAH proposed by KAI globally kept the design of the Surion family: a twin-engine 1,800 shp , a 8,7 t MTOW and a useful load of 5,9 t, an operational range of 646 km and an endurance of 3h40. KAI added a suite of weapons allowing the chopper to perform two main missions, including from the ROK Navy Dokdo-class LPHs: air assault support and anti-tank attack.

The weapons package includes a 20 mm Gatling gun with 1,400 rounds, 2.75 inch rocket pods, two quad-launchers for antitank guided missile and two dual-launchers for the MBDA’s Mistral ATAM air-to-air missile. South Korea has been using the ground-based Mistral variant for a while.