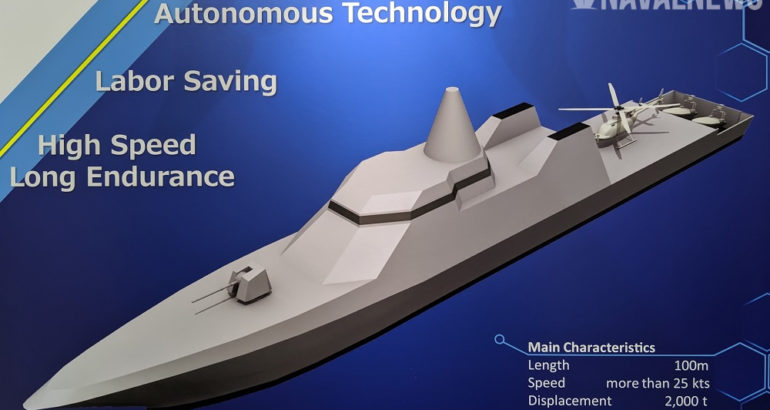 Mitsui E&S design, which was unveiled to the public today at MAST Asia, benefits from “full ship digitization” according to its naval architect: The vessel is highly autonomous, meaning the highly reduced crew (of only 23 sailors) have less labor intensive tasks to complete compared to vessels of similar size available today.

Powered by two diesel engines (one for each shaft), the 100 meters long, 2,000 tons vessel is designed for long endurance missions (in excess of 1 month) and can reach speeds in excess of 25 knots.

Mitsui’s OPV is designed to deploy UAVs and two USV thanks to stern ramps. It features a 360° panoramic bridge and some new systems designed by Mitsui to reduce labor for the crew such as an autonomous maneuvering system called “Auto Target Chasing”.

The weapon systems consist in a 76mm main gun and 2x 12.7mm remote weapon stations. The vessel will also be fitted with Chaff launchers and a multifunction radar.

The main missions of the JMSDF’s future OPV will be surveillance, coastal patrol and intelligence gathering. There two other Japanese companies taking part in the competition (in addition to Mitsui): Mitsubishi Heavy Industries and Japan Marine United. One of the competing design is rumored to be a catamaran design. The Japanese MoD is set to award a contract to the winning company in 2022. Mitsui told Naval News that it would take them 3 years to deliver the first ship, including the basic design phase.

Besides the OPV requirement, Mitsui is looking forward to the “FFM baseline 2” frigate requirement. Mitsubishi Heavy Industries is currently under contract to build the first frigate of the first baseline, while Mitsui will build the second one (of baseline 1).