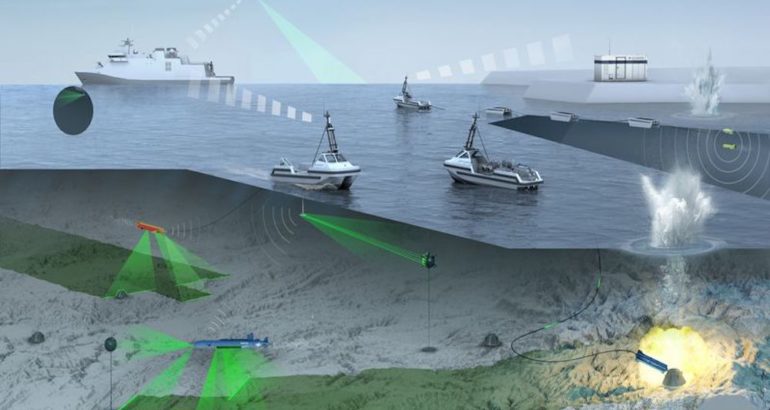 ATLAS is defining the standard in naval mine countermeasure systems for decades and is the only overall MCM system supplier providing the complete sensor to effector capability, ATLAS ELEKTRONIK Group said on January 31, 2019.

The actual MCM Vessels operated by Belgium and the Netherlands were integrated by ATLAS ELEKTRONIK and are equipped with the combat proven ATLAS MCM Command and Control System (Integrated Mine Countermeasures System – IMCMS).

The offered system is not just a collection of bits and pieces build up out of proposals of different suppliers, it is a proven, integrated state of the art system and really at the 1.0 level. ATLAS’ offer includes the sophisticated integration into the Combat Management System of the vessels and next to that being able to work on a stand-alone basis.

ATLAS would be proud to work with the Belgium Navy with respect to the continuous development amongst the procured MCM Toolbox and improve their logistics support. Such a cooperation would minimize costs and enable the involvement of the Belgium industry to a maximum.

The proposed Center for Maritime Autonomy (CMA) lays out the vision of Atlas Elektronik on how the Belgian Navy could succeed in the upcoming new area of naval force development. The Belgian Navy is the ideal partner to launch the CMA because it is agile and open towards new concepts such as the offered MCM toolbox. In adopting a holistic approach to naval innovation, the CMA will foster the Belgian Navy role as a thought and practice leader on maritime autonomy in the 21st century. CMAs activities will support the MCM community as early adopters of unmanned technology and will expand to other warfare areas such as ASW, harbor and critical infrastructure protection an. Furthermore, opening up the CMA for cooperation with partners from other European nations (and beyond) strengthens Belgium’s strong European vocation and will be instrumental in shaping European thinking on future naval operations with unmanned systems.

The CMA is conceptualized as a public private partnership (PPP) between Belgium, Beglian industry, Belgian academia and research institutions and ATLAS ELEKTRONIK. Consequently the CMA will be a Belgian institution in Belgium for Belgium.

Therefore, the CMA will utilize a comprehensive partnership program to make maximum use of the technology expertise of Belgium’s research and industrial ecosystem. In doing so, the CMA will be a major hub within this ecosystem for applied research and development focusing on the naval and maritime application of unmanned systems. In addition, the Center will also become a major gateway for Belgium’s partners to connect with international stakeholders and vice versa. The CMA will open up avenues to a broad set of partners:

The CMA will support the Belgian Navy’s position as lead nation in autonomous naval MCM. The CMA also encompasses ATLAS’ ambition to be part of the next generation of naval warfare systems for the decades to come. As neighbors within the European Union ATLAS will be a reliable partner even in times of changing global security environments. Due to ATLAS‘ experience as MCM capability provider and our broad customer base our mission is to develop the next generation of MCM systems.

The direct Impact by just considering the BE NL future MCM program and closely related European MCM programs with ATLAS involvement in will lead to additional work for the Belgian industry and thus creating hundreds of permanent jobs.

This involvement will also include the build, outfitting an integration of the ARCIMS autonomous surface vessels, the related launch and recovery systems, building and integration of combat management consoles and the transfer of technology for the through life support.

If the effects on other business in the field of autonomous systems besides MCM (e.g. Anti Submarine Warfare (ASW), security of critical infrastructure, offshore industry) and secondary effects based on the knowledge built up around the center for maritime autonomy are taken into account a much higher and sustainable impact on the Belgian industry will occur.

Xavier Vavasseur 05 Dec 2021
On 30 November 2021, French shipbuilder Naval Group laid the keel for the first of the twelve Oostende-class mine countermeasure vessels...

Xavier Vavasseur 30 Nov 2021
On 30 November 2021, Naval Group has laid the keel for the first of the twelve mine countermeasure vessels of the Belgian-Dutch rMCM program...