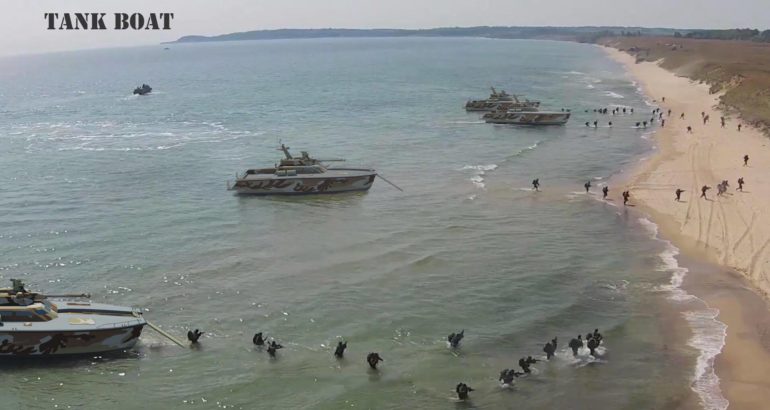 The Indonesian Ministry of Defence recently ordered a first prototype of the so called X18 « Tank Boat », which is being designed since 2011 by a consortium composed of PT Pindad, North Sea Boats (PT Lundin) and the Belgian turret maker John Cockerill (formerly known as CMI Group).

Composed of more than 18,000 islands spread over 8 million km² of waters, the Indonesian archipelago is facing a growing threat coming from piracy and the Chinese neighbor. The continuing deterioration of the security situation in the region put forward the need for a fast, heavily weaponized multirole platform which will be capable to conduct reassurance patrolling, small-scale rescue missions, as well as fire support capabilities for amphibious infantry.

Three years after the consortium unveiled a full scale model of the X18 « Tank Boat » concept, the program is finally moving to a demonstration phase. A single prototype has been ordered by the Indonesian MoD about two months ago under the Antanesa program, with the Indonesian Army as final customer, Naval News learned from industry sources.

The consortium will provide the « light » variant of the boat equipped with the CPWS Gen 2 25/30 mm remotely controlled turret. Dubbed « APC-60 », this variant will be able to accommodate up to 60 soldiers.

The North Sea Boats’ X18 « Tank Boat » is an innovative, fast and highly maneuverable catamaran design that provides a stable weapons platform for close-in and long range artillery support in normally inaccessible coastal and riverine environments. Fitted with two MAN 1200 HP diesel engines and a pair of MJP450 waterjets, the X18 reaches a maximum speed of 40 knots for an operational range of up to 600 nm. Its composite twin hull has excellent sea keeping properties, giving the boat the ability to execute beach and river landing and insert or extract squads of up to 20 soldiers. The X18 has a crew of 4 and will also carry a RHIB for boarding and SEAL insertion. A multi-mission aft deck will provide enough space for UAV take off landing, to fit a missile launcher or for logistics missions.

As previously mentionned, the main armament will be provided by a sole CPWS Gen. 2 turret installed on the deck’s roof. Beyond the advantages of the John Cockerill CPWS in particular in terms of crew protection during the reloading operations of the main weapon, this CPWS Gen. 2 presents, with its unique configurable hatch, the ability to adopt different configurations depending on the mission profile.

The Cockerill CPWS Gen 2 turret is equipped with a bi-modal stabilized high performance (thermal) day/night sight for 24 hour use. The aiming system provides the operator with panoramic 360° vision, independently of the position of the turret. Once locked onto the target, the gun automatically aligns with the aiming system.

North Sea Boats should launch the Tank Boat prototype by the end of the year, along with a new trimaran prototype based on the X3K design already built and launched in August 2012 (but destroyed in a fire). Both are being built at the shipyard in Banyuwangi, East Java, Indonesia.

Naval News Staff 02 Oct 2021
On August 31st, 2021, Terma has been awarded a contract to supply a third-party Electronic Support Measures (ESM) systems integrated with our C-Flex Patrol for 6 vessels.