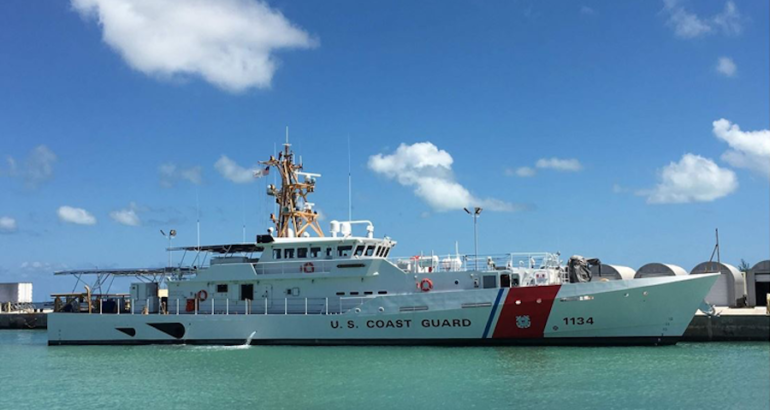 The USCG 34th fast response cutter (FRC), William Hart, arrived in Key West, Florida, prior to its delivery on May 23, 2019 (Credit: Bollinger Shipyards)

The US Coast Guard accepted delivery of the 34th fast response cutter (FRC), William Hart, in Key West, Florida, the service press office said on May 23, 2019. The cutter will be the third of three FRCs stationed in Honolulu.

William Hart, the cutter’s namesake, received the Gold Lifesaving Medal for his actions in November 1926. Hart was commanding officer of a boat that assisted the stranded tug Thomas Tracy, in heavy sea conditions, near the Absecon Bar in New Jersey. After it became necessary for the tug’s crew to abandon ship, Hart maneuvered his boat close to facilitate the transfer. When one of the tug’s crew members fell overboard and was in imminent danger of drowning, Hart jumped in and saved the individual at great personal risk.

The FRCs are replacing the 1980s-era 110-foot patrol boats and feature advanced command, control, communications, computers, intelligence, surveillance and reconnaissance equipment. The cutters feature improved habitability and seakeeping, and over-the-horizon cutter boat launch and recovery from astern or via side davits. Each FRC is 154 feet long, has an endurance of at least five days and can reach a maximum speed of over 28 knots.

Thirty-two are in service: 12 in Florida; six in Puerto Rico; four in California and two each in Alaska, New Jersey, Mississippi, Hawaii and North Carolina. The Coast Guard has ordered 50 FRCs to date. Future FRC homeports include Galveston, Texas; Santa Rita, Guam; Astoria, Oregon; and Kodiak, Seward and Sitka, Alaska.