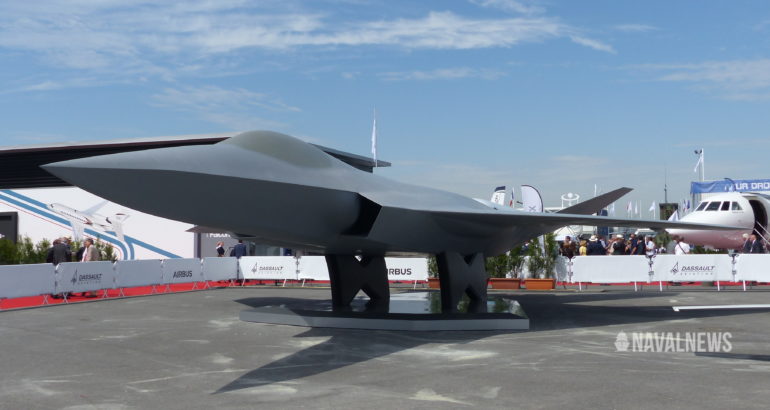 The design of the aircraft displayed at Paris Air Show will likely evolve in the next years.

The lack of tail and the size of the nose and engines depicted what looked like a very stealthy 5th generation fighter-bomber rather than a true 6th generation multirole combat aircraft. Indeed, this vision of future combat aircraft was based on Dassault’s preliminary studies undertaken long before France and Germany —now joined by Spain— started collaborating on the SCAF/FCAS.

A new design for the NGF

But last week at the Paris Air Show, Dassault and Airbus finally unveiled a full-scale mock-up of a radically different design. This NGF (Next Generation Fighter) is meant to be the manned part of the FCAS/SCAF system of system that will also include an Air Combat Cloud (ACC) and several Remote Carriers (or loyal wingmen). The design displayed at Le Bourget on June 17 is therefore due to reflect current ideas of what a future combat aircraft should looks like circa 2040:

“A lot of details remains unclear. The final aircraft and engine configurations are yet to be defined between the air forces and the manufacturers. But what you see today if very close to what would be an operational NGF.”

For all the companies involved in FCAS/SCAF at every level, the real design work will start in the following months. French, German and Spanish air forces —and French navy— are indeed expected to release a common road map. Currently, the FCAS/SCAF and NGF are in Demonstrator Phase that will last at least two more years. During this time, the concept (and look) of the Next Generation Fighter will most probably evolve drastically.

However, despite all the doubts around the final design brief and specifications of the NGF, Dassault confirmed to Naval News that the SCAF will be onboard the aircraft carrier that will replace the Charles de Gaulle circa 2035-2040.

The changes in the aircraft configuration since last October show major improvement in handling and maneuverability at low speed. Despite an increased weight and size, the NGF will probably be able to land at a lower speed than the Rafale, thus diminishing the stress on the airframe of the naval variant.

If the long nose of this NGF design restricts the front view for the pilot, advanced technologies available in the next decades should elude such a limitation. Distributed Aperture System, Helmet Mounted Synthetic Vision, automatic carrier landing and thrust vectoring nozzle are among some of the technologies displayed at Paris Air Show that could find their way in the final design of the NGF and ease carrier operations.

In each and every case, a large multirole stealth naval aircraft will require a larger aircraft carrier than the Charles de Gaulle. The successor(s) of the sole available carrier in France is currently at the design stage and should be able to operate a full air wing of NGF alongside AEW aircraft, helicopters and Remote Carriers UAVs.

In the longer term, Spanish involvement in SCAF/FCAS could offer Madrid the possibility to replace its light aircraft carrier fleet with a full scale aircraft carrier able to carry NGF fighters.

Following the presentation of the mock-up, Defense Ministers of France (Florence Parly), Germany (Ursula von der Leyen) and Spain (Margarita Robles) signed an agreement that set the legal framework of a jointly developed FCAS/SCAF. The first flight of an NGF prototype is not expected before the second half of the next decade, at least.