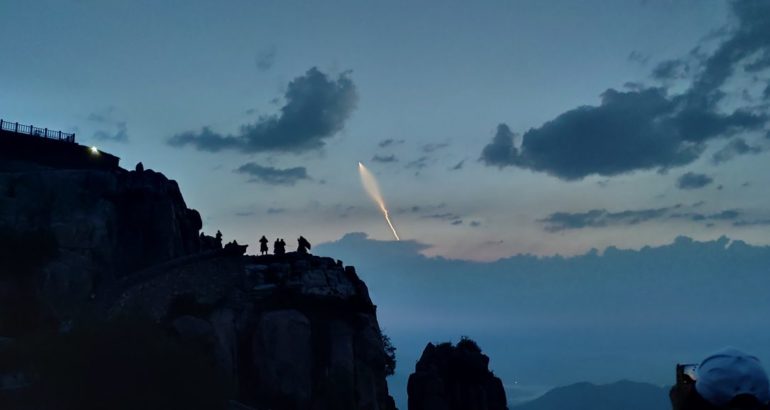 Did China conduct the first test flight of its new JL-3 SLBM ?

Several imageries and eyewitness accounts indicate that China likely conducted a missile launch on 2 June. Our colleagues from East Pendulum analyze the open source information and explain why the test could have involved the country’s next-generation submarine-launched ballistic missile (SLBM), the JL-3.

There was a time when China’s first nuclear-powered submarine, known as Type 09II, was forced to take off without its strategic JL-1 submarine launched ballistic missile (SLBM) because of considerable delay in its development. The successor of the latter, the JL-2, has achieved little better and experienced a series of unfortunate events as well: The failure of its validation flight in April 2009, which forced the manufacturer (CALT) to review parts of the design while extending the development by 3 years, while the Type 09IV nuclear-powered ballistic missile submarine (SSBN) was already in operation since 2008. Will the JL-3, the third generation of the Chinese SLBM, perpetuate this annoying “tradition” ?

It is probably still premature to answer this question, knowing that the future carrying submarine, Type 09VI, has not yet hit the water at the Bohai shipyard for the moment. The JL-3 missile is also at the beginning of its test campaign, with an ejection test conducted in November 2018 according to US intelligence.

But elements appeared in early June suggesting that the program of the future missile has taken an important step in its development, by performing its true maiden flight from a submarine test bench of the Chinese navy (PLAN), stationed in the Bohai Sea.

No less than a dozen photo and video testimonials surfaced on Chinese social networks indeed, June 2. Photos and videos taken by internet users around 4:30 am show that a flying object has crossed the skies of at least five provinces, over a distance of more than 1,000 kilometers, leaving behind a plume of bright white smoke.

By examining some of these snapshots, particularly those that accurately identify a known place or geographical landmark, it is believed that the object should have flown west, with a starting point located between the Shandong Peninsula and the Liaoning peninsula, therefore on the northeastern coast of China.

These elements are consistent with the LN-0096 notification, issued by the Liaoning Maritime Safety Administration and active Sunday, June 2 from 02:30 to 12:00, which indicates the presence of a closed sea area “due to military mission” in the Bohai Sea.

There is therefore a strong probability that the observed phenomenons and the “military mission” mentioned in the Chinese maritime safety notification are linked.

Note that a perfectly identical zone had already been reported a day earlier, on Saturday, June 1, by the notification LN-0095 for a period ranging from 07:00 to 13:00. But without any apparent testimony, it is reasonable to assume that the launch mission was postponed for unknown reasons.

Of course nothing clearly identifies the flying object as being the new JL-3 Chinese SLBM, at least not with open source elements today. This test could have been a JL-2 flight too, used to check the availability of the missile, as the US Navy regularly performs with their Trident missiles.

Note that regardless of the model of the missile used in this flight, target areas are likely located in western China, around the Taklamakan desert, as for the JL-2 tests between 2011 and 2012.

Although no message to aircrew (NOTAM) was issued for this flight, there is still a local government announcement of the Otog banner (鄂托克旗) issued on June 2, which calls for farmers in villages around to locate a “big fallen component” in the vicinity, and promises a reward.

The text indicates that the object will have fallen at dawn and asks all who may find debris to “do not approach, do not try to disassemble, and not take a picture.” The locations specified in this announcement (see the yellow dots below) are inside one of the fallout zones of the JL-2 trials in 2011 (see the light blue areas).

One can only wait for a possible confirmation from the United States to know the nature of this Chinese test, and to find out if it is a test of the new JL-3 which is intended to increase the country’s nuclear capacity, as suggested previously by the US.

In the meantime, we can at least be certain that the test, underwater if there is one, should not take place in a depth beyond 60 meters because of the deepest waterway in the area indicated by the notification – the waterway “Lao Tie Shan” (老 铁山 水道).