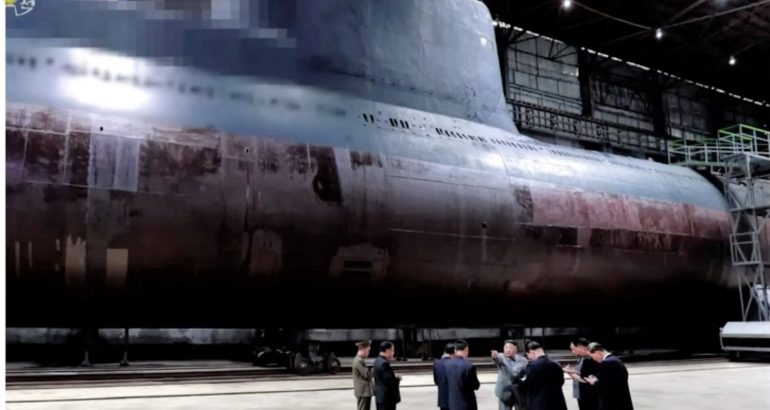 North Korean state media KCNA released footage showing the communist leader inspecting a new submarine under construction at a shipyard. This new submarine appears to be based on the late 50ies Romeo-class, a Soviet design, and is likely able to deploy a limited number of submarine launched ballistic missiles (SLBM).

Without giving more details about the vessel or the shipyard’s location (probably located in Sinpo on the east coast), KCNA said the submarine would be deployed in the East Sea (Sea of Japan), that it was close to being operational and that Kim Jong-un was paying “special attention” to its construction.

“The operational capacity of a submarine is an important component in national defense of our country bounded on its east and west by sea,”

The North Korean Navy (KPN) has a large number of submarines in its fleet. Probably several dozens, most of them qualified as midget submarine range from 20 to 40 meters in length. In the KPN doctrine, these would be used for asymmetrical warfare to face much more capable (and technologically advanced) enemy fleets, in the shallow waters of the North Korean littorals.

The KPN also has about a 20 Romeo-class submarines, some of them acquired from China (Type 033) in the 70ies, on which the “new” submarine appears to be based on.

As noted by our colleagues at Covert Shores, who are recognized expert in topics related to submarines, “The footage clearly shows the twin-screws (propellers) with shrouds per the ROMEO, and also the bulbous sonar dome at the base of the bow. It also shows that a new deck casing has been fitted alongside and behind the sail confirming that this is a modified boat. A corner of the sail’s trailing edge is just visible in one of the first images released”.

“However, the modifications are consistent with sail-mounted ballistic missile silos, similar to the Gorae Class submarine (and Soviet era HOTEL and GOLF Classes). From hints visible in the KCNA images it appears that the missile tubes are located in the aft battery compartment directly ahead of the engine room”.