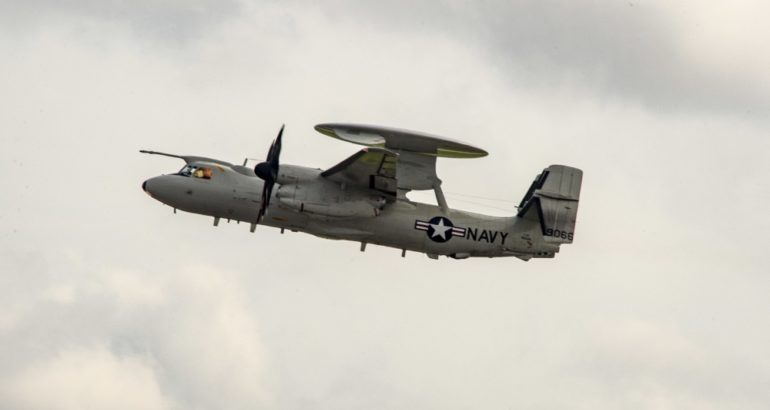 NORFOLK, Va. (Septe ember 9, 2019) - An E-2D Hawkeye prepares to land and be recieved by the Greyhawks of Carrier Airborne Early Warning Squadron (VAW) 120 on Monday, September 9 at Naval Station Norfolk. This is the first E-2D Hawkeye with aerial refueling capability to join the fleet, increasing the Navy™s battlespace awareness and integrated fire control " both from the air and the sea. (U.S. Navy Photo by Mass Communication Specialist 3rd Class Nikita Custer)

A U.S. Navy E-2D Advanced Hawkeye able to be refueled in midair is now with VAW-120, the Carrier Airborne Early Warning community's replacement training squadron. A prototype E-2D with the refueling probe flew first in December 2016. The new capability will bring a huge step forward in capability and endurance.

An E-2D Advanced Hawkeye capable of aerial refueling landed at Naval Station Norfolk Sept. 9, officially marking the arrival of this upgraded aircraft to the fleet.

“This is an important day for naval aviation as we continue to increase our capabilities and maintain our competitive edge in the skies. This capability will extend the endurance of Hawkeyes, increasing the Navy’s battlespace awareness and integrated fire control – both from the air and the sea.”

“Aerial refueling capability is a game-changer for the E-2D community and future operations in the high-end fight. We will now begin to train instructor pilots and refuel with several different Navy and Air Force tanker aircraft, including F/A-18s.”

VAW-120 is only the first step in rolling out this new capability. The U.S. Navy will transition two operational fleet squadrons to aerial refueling capable E-2Ds by 2020.