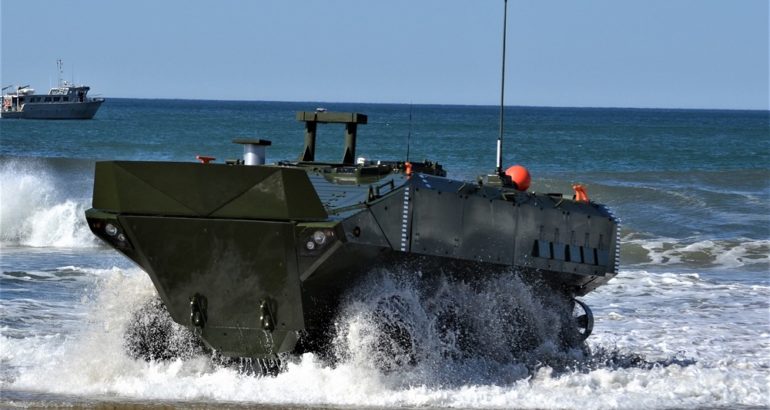 This award is an important next step on the path to full rate production. This latest contract is for the ACV personnel carrier variant (ACV-P), an eight-wheeled amphibious assault vehicle capable of transporting Marines from open-ocean ship to shore and conducting land operations. Each vehicle embarks 13 Marines in addition to a crew of three.

“This award further validates the Marine Corps’ confidence in the vehicle’s proven capability in meeting their amphibious mission, and represents an important step toward fielding the vehicle in the Fleet Marine Force. The ACV is a highly mobile, survivable and adaptable platform designed for growth to meet future mission role requirements while bringing enhanced combat power to the battlefield,”

Current low-rate production is focused on the ACV-P variant. More variants will be added under full rate production to include the command and control (ACV-C), 30mm medium caliber turret (ACV-30) and recovery variants (ACV-R) under the ACV Family of Vehicles program. BAE Systems previously received the Lot 1 and Lot 2 awards.

The Marine Corps selected BAE Systems along with teammate Iveco Defence Vehicles for the ACV program in 2018 to replace its legacy fleet of Assault Amphibious Vehicles, which have been in service for decades and were also built by BAE Systems.