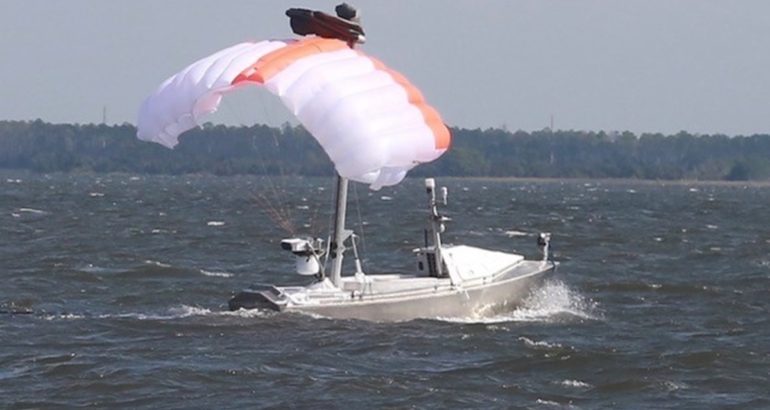 The Towed Airborne Lift of Naval Systems (TALONS) is a parafoil-based system shown kiting from the Greenough Advanced Rescue Craft. TALONS relays data between the MCM USV and the LCS via the government-developed multi-vehicle communication relays system. (Credit: US Navy/Released)

The US Navy completed a demonstration of the Greenough Advanced Rescue Craft (GARC) and Towed Airborne Lift of Naval Systems (TALONS), the service announced Nov. 25.

The US Navy completed a demonstration of the Greenough Advanced Rescue Craft (GARC) and Towed Airborne Lift of Naval Systems (TALONS), the service announced Nov. 25.

The GARC/TALONS prototype is being evaluated to provide enhanced communication ranges for the Littoral Combat Ship (LCS) Mine Countermeasure (MCM) Mission Package that could reduce the time to clear a minefield.

“This achievement marks an important landmark in the potential acquisition of an enhanced communication range solution for the Navy,” said Capt. Godfrey Weekes, LCS Mission Module program manager. “From concept to at-sea demonstration within 10 months is quite remarkable and is in alignment with senior Navy direction toward rapid acquisition.”

The Greenough Advanced Rescue Craft (GARC) is designed by Maritime Applied Physics Corporation (MAPC) in Baltimoren, MD. In its manned configuration, the GARC is a high-performance rescue vehicle.  It can be deployed from C-130 and C-17 aircraft and is in use by USAF units worldwide.  The vessel is used to rescue downed USAF air crews and passengers on commercial airliners that ditch in the open ocean.

MAPC has developed unmanned variants of the GARC rescue craft.  These vessels have applications in the U.S. Navy and Special Warfare communities as well as in various commercial offshore applications. MAPC is under contract to deploy unmanned GARCs in cable survey operations for offshore wind and other federal government sponsors.

TALONS stands for Towed Airborne Lift of Naval Systems. It is a large, tethered parafoil kite that can carry payloads from a host vessel to 1,000 feet in elevation or more. During REP (MUS), TALONS carried a radar and radio-relay system provided by the United Kingdom in order to extend communication ranges between unmanned vehicles, ships and shore points.

The TALONS project started back in 2015 as part of DARPA’s Phase 1 research for Tern, a joint program between DARPA and the U.S. Navy’s Office of Naval Research (ONR). Towed behind boats or ships, TALONS could persistently suspend intelligence, surveillance, reconnaissance (ISR) instruments and communications payloads of up to 150 pounds at altitudes between 500 and 1,500 feet above sea level—many times higher than current ships’ masts—greatly extending the equipment’s range and effectiveness.

TALONS’ testing started in 2015. The first test aboard a U.S. Navy vessel, the USS Zephyr, a 53-meter Cyclone-class patrol coastal ship, took place in 2017. But the recent REP (MUS) 2019 exercise was the first occasion for the U.S. Navy to test the innovative system aboard a much larger surface combatant.