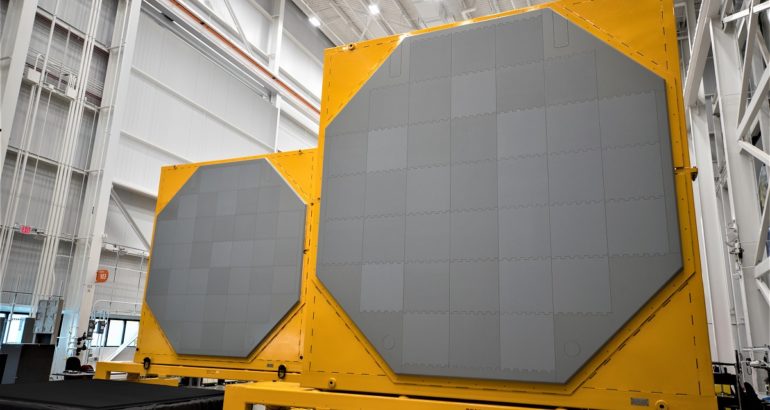 Two SPY-6(V)1 arrays in Raytheon’s Radar Development Facility in Andover, Massachusetts. Currently in LRIP, an RFP for full rate production is expected to come out in 2020. Raytheon picture.

Raytheon will build two additional shipsets of SPY-6 radars under a $250 million contract with the U.S. Navy. The company is now contracted to deliver a total of nine radar shipsets to DDG-51 Flight III destroyers.

SPY-6 is a family of next generation, integrated air and missile defense radars that scale to meet the mission requirements of any ship.

“SPY-6 delivers significantly enhanced range and sensitivity [compared to legacy sensors], and gives geographically dispersed ships the ability to share – and act on – sensor data in ways never before possible. This radar gives the Navy unprecedented operational flexibility to defend against ballistic and cruise missiles as well as advanced surface and air threats.”

Since its inception in January 2014, the SPY-6 program has met all 20 milestones, ahead of or on schedule. The radar has a track record of performance, demonstrating its multi-mission capabilities against an array of single and multiple, simultaneous targets throughout the Navy’s extensive testing program.

Now in production at Raytheon’s advanced Radar Development Facility, AN/SPY-6(V) remains on schedule for delivery to the first DDG 51 Flight III, the future USS Jack H Lucas (DDG 125). The first delivery of AN/SPY-6(V)2 to LHA-8, the America Class Amphibious Assault Ship, is on plan for 2021. Raytheon awarded US Navy contract for SPY-6 family of radars

Naval News Staff 24 May 2022
Raytheon is awarded a $423 million contract to continue to produce SPY-6 radars for the U.S. Navy.