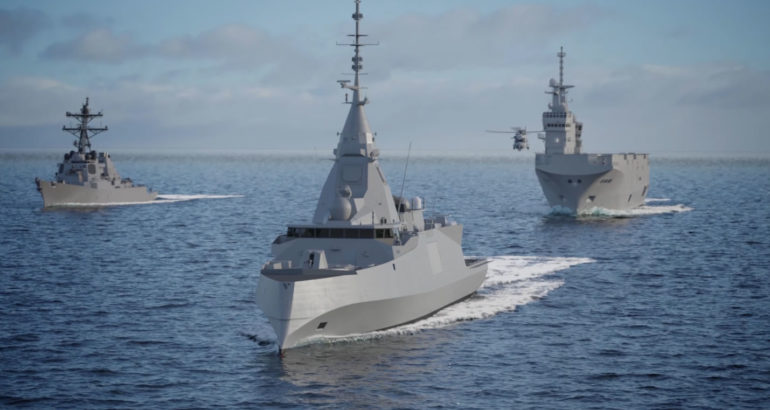 Artist impression of a Belharra frigate in a coalition. Naval Group image.

During an event at the French Embassy in Athens on February 13th, 2020, Naval Group unveiled its long-term cooperation plan developed to support the acquisition program of two FDI frigates (Belharra-class) for the Hellenic Navy.

Naval Group, based in Athens since 2008, is proud to be an integral part of the strong strategic alliance between Greece and France.

Thanks to its long-lasting presence in Greece, Naval Group created the conditions for a long-term cooperation with profits for the Greek industry and the creation of high-technology jobs. Naval Group has a robust expertise in building such partnerships worldwide.

“This cooperation plan will support the Hellenic Navy in achieving regional superiority at sea, but also the ability of the Hellenic industry to actively prepare the future of naval warfare.”

Investing to support the FDI program

Naval Group will share expertise and knowledge with the Hellenic Navy and industry to ensure the ships’ availability over their 30-year lifespan.

Alain Guillou explained “We want to build a long-term partnership with the Hellenic industry and to guarantee the success of the frigate program as well as Hellenic sovereignty through an extensive transfer of technology. The local industry will master the know-how required to support the entire life-cycle of the frigates.”

The follow-on support will be based on the creation of a Digital Support Centre, capable of securing and verifying the integrity of the ship’s data. Naval Group’s combined capabilities in terms of i-maintenance, artificial intelligence and big data will ensure an improved operational availability and a reduced maintenance cost. Together with its Hellenic partners, Naval Group will also support the training of both crews and maintenance teams of the Hellenic Navy with the best simulation technologies.

France will also be operating 5 FDI frigates known as the Amiral Ronarc’h-class. The first of class will be delivered in 2023 with an entry into active duty in 2025. FDI is the French version of the Belharra family by Naval Group. The French design has a displacement of 4,500 tons and is 122m long. The group plans on creating an Engineering Centre in charge of the design and development studies for future standards of the Belharra-class frigates, making Greece a European centre of excellence for naval warfare innovation.

Beyond Naval Group, the FDI program will bring different actors from the French naval industry to invest in the country and develop partnerships with Greek companies, creating added-value and jobs for decades to come. The FDI program already fostered the rapprochement of the two naval sectors with the GICAN and SEKPY signing a Protocol of Agreement at the same event at the French Embassy.

The structured and long-term partnership with the Hellenic industry and naval ecosystem proposed by Naval Group will foster production in Greece but also the capability to address future needs.

“Naval Group has been working with the Hellenic Industry for many years. Sunlight in particular is a strategic supplier for Naval Group’s submarines programs. We know the quality of the companies here and we want more to join our supply chain and to join us on-board our different programs” mentioned Alain Guillou during his speech.

Following the progress of the FDI program, 8 new Greek companies have joined Naval Group international supply chain in late 2019. They signed Letters of Intent during the 13th of February event regarding their involvement in future programs of the French group. About 20 more are currently being surveyed to join later this year.

Regarding the longer vision of the program, Alain Guillou explained “the Belharra-class frigates will integrate successive generations of systems over their 30-year lifespan. We want Greece to be at the centre of European naval innovation. We already signed partnerships with 3 universities but we want to go further with industry and academic partners here to address the future needs of the frigates but also more largely the future of the naval sector.”

Naval Group has a strong interest in developing collaborative R&D projects with Hellenic companies, universities and research institute in cutting edge technologies such as additive manufacturing or drones. Naval Group aims at developing a network of technological and research projects so as to build the Hellenic future naval warfare capabilities. During the event, Naval Group signed partnerships with NTUA, University of Patras and the University of Crete.

Naval Group also intends to support the development of Greek startups by setting up a startup and SME accelerator.

Naval Group is already working on cyber security applied to the naval and maritime domains with Greek partners in the frame of different European programs such as CYBERMAR as well as the PESCO Pandora and H2020 projects.

Finally, France and Greece share a common need for maritime surveillance. Naval Group proposes to create, together with Greek partners, an industrial and commercial activity that would address the European market from Greece. Naval Group has begun discussions with Hellenic companies in order to position itself on European research programs and to carry out
joint projects.