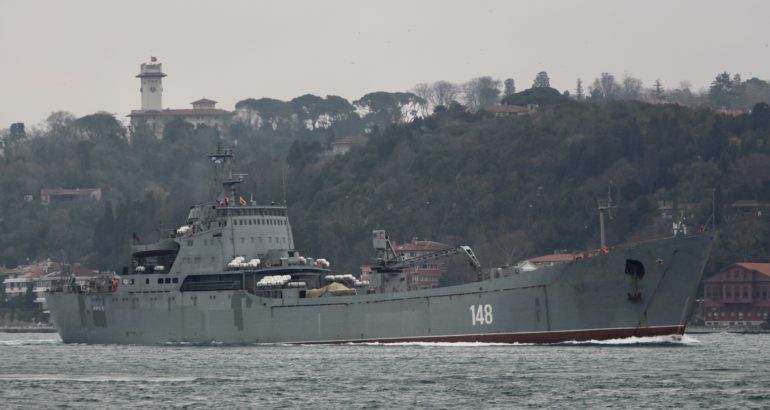 The Turkish flag flies atop Khedive Pavilion in the background as Orsk transits towards Syria, March 22 2020. Photo: Yörük Işık.

Against a backdrop of the uneasy deal between Turkey and Russia in Syria, and growing national emergencies due to the COVID-19 pandemic, Russian warships continue to pass south through the Bosphorus.

The narrow waterway connects the Mediterranean to the Black Sea, and passes directly through the Turkish capital. Russian forces in Syria have relied on it as a major supply route between their home ports in the Black Sea and their base in Tartus, Syria.

Orsk (148), a Project 1171 Alligator Class landing ship, transited southbound towards Tartus on March 22. She was traced via various OSINT (open source intelligence) means, and photographed by respected ship spotter Yörük Işık. The landing ship belongs to Russia’s the Black Sea Fleet and has run supplies to Syria before. She joined the fleet in 1968 and is one of only 4 Alligator’s left.

Orsk is capable of carrying heavy vehicles as well as general supplies. Another landing ship, the Project 775 Ropucha-class ship Novocherkassk (142) headed the same way at the beginning of March. In some respects the heavy resupply vessel movements are more significant than the frigates and corvettes which also pass through.

The resupply corridor may pose a threat of spreading Coronavirus. The extent of Russia’s exposure to the disease is debated with official figures being relatively low (306 as-of March 22). Syria has reported its first case but the extent of the spread there can only be speculated at due to the uncertain situation on the ground.