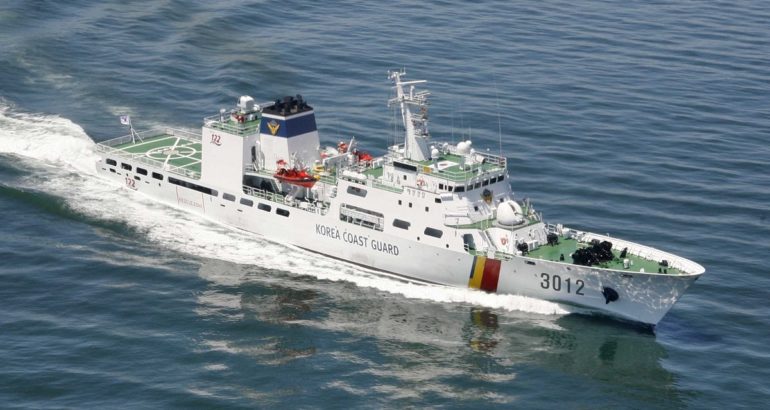 The two vessels are set to join the “Eastern Regional Coast Guard” which typically patrols the East Sea (also known as Sea of Japan). One ship (pennant number 3016) is set to launch this year and another (pennant 3017) will begin construction next year to be put into service by December 2023.

According to the Korea Coast Guard, the program for the two vessels is valued at 90 billion Won. These 140 meters-long vessel (with full displacement of 4,000 tons) will allow Eastern Regional Coast Guard to better patrol and administer fishery resource in waters surrounding Dokdo.

According to the Yonhap news agency, “Safety management is important because fishing vessels from four countries including Korea, North Korea, China, and Japan are mixed and operate in the Dokdo area because the maritime boundary is unclear.”

The Tae Pyung Yang (Pacific) class is a class of large (3000 tons class) patrol vessels of the Korea Coast Guard. These vessel are only second (in size) to the two Sam Bong-class vessels of the agency (which are 5,000 tons). Tae Pyung Yang-class is said to be very survivable, as they were built following naval vessel standards.

Korea Coast Guard currently has 13 Tae Pyung Yang-class vessels in service (including one service as training ship). The first vessel (pennant number 3001) was built in 1994 and the last one (pennant number 3015) in 2015. The Eastern Regional Coast Guard only had one such vessel in its fleet thus far.

Ships in the class are not identical: They were built by two shipyards Hyundai Heavy Industries and STX Offshore & Shipbuilding. Their full load displacement ranges form 3,860 tonnes to 4,450 tonnes and their equipment configuration varies. For example their weapon systems consists in either Doosan DST ‘No Bong’ dual 40mm gun and Sea Vulcan 20mm mounts, or two Sea Vulcan mounts or a OTO Melara 40 mm and Sea Vulcan or a single Sea Vulcan mount.